Whew. A bumper two days of progress on the layout. The text is going to have to be relatively brief as I have to be up very early tomorrow to pack everything in the car and make the 2+ hour trip to Swanley.

So, first things first was to re-attach the crane on the harbour that I kept knocking off (and damaging its plinth). I decided the best way to go forward was to drill a hole in the base of the crane and in the plinth, and simply use a cocktail stick to make for a removable yet sturdy support. 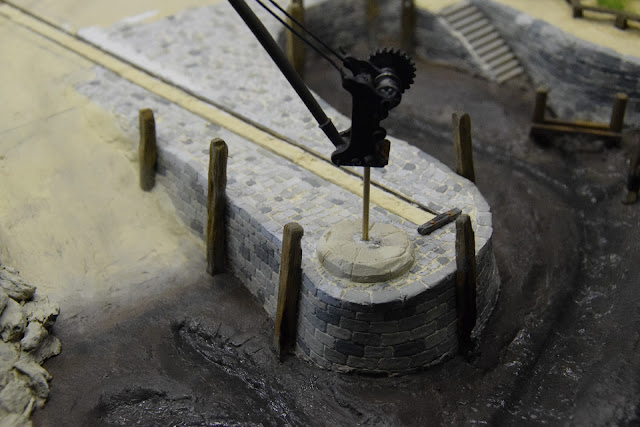 I've always intended to add seaweed on the high tide mark. Having researched real-world examples around the coast near Calshot, I came up with what I hope is a fair representation of how it might form on walls, rocks, and the beach itself. The seaweed itself was simply green fine turf mixed with watered-down PVA and darkish green paint. I found the best way to attach it was to use additional neat PVA, and a dentists tool; using brushes inevitably resulted in the mixture firmly attaching itself to the brush and not the intended areas!

Next up, the area under the trestle needed some treatment to fill in the holes underneath. A plaster mix and a coating of paint and play sand soon sorted that out. I could then add the seaweed (being careful to follow photos found online; it seems most strandlines occur in arches across the beach), and then dry brush it several times in multiple yellows, blacks, and greys to tone it down and blend it all together.

The next area to receive attention was the quayside track. At some point over the last year, the clay around the roadway has lifted up and cracked. Rather than tear it all up and start again, I decided to sand it back and repaint it to represent a nasty tarmac "repair" job! Note how the edges have been painted with a thin line of darker grey, and the whole lot weathered to tone it all down a bit.

Today's job was mainly to sort out wagon loads; it's something (as you may have noticed from the magazine article) that was sorely needed. I actually spent about 5 hours today working on turning this: 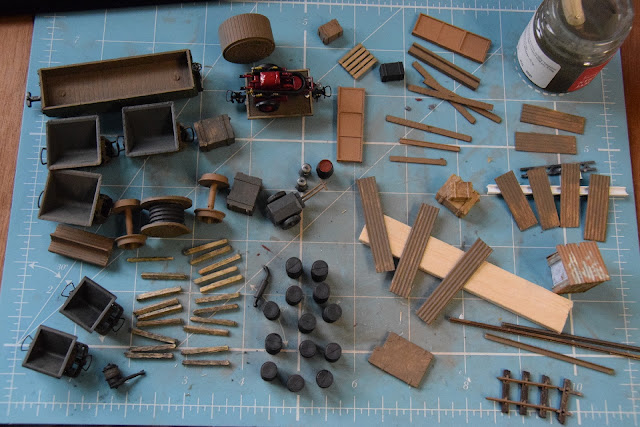 Into a lengthy assortment of wagon loads:

I also took the time to finish painting various wagons, and I'm also in the middle of making some ballast loads for these 5 tippers from plaster. Note how I've lined the tippers with clingfilm so that I can make the loads removable. 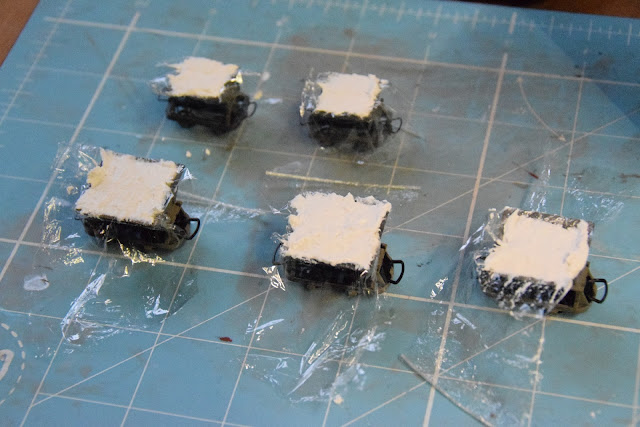 Oh, and one final job was to "finish" off the lighthouse. The railing stanchions were re-spaced, and the handrails soldered in place. The whole lot could then be painted with 2 coats of off-white paint. As you can imagine, this was a bloody fiddle job; especially as the stanchions were wobbly plastic! OH, and I also finally got around to adding the windows that I had made ages ago. I've actually fully bedded them in with plaster so they all have proper frames and fit snugly. 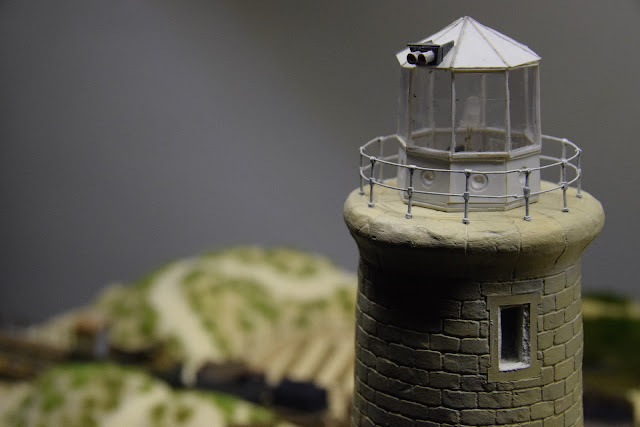 So there we have it, whilst I didn't get around to adding any vegetation/trees to disguise the scenic exit, the overally appearance of the layout has been dramatically improved. 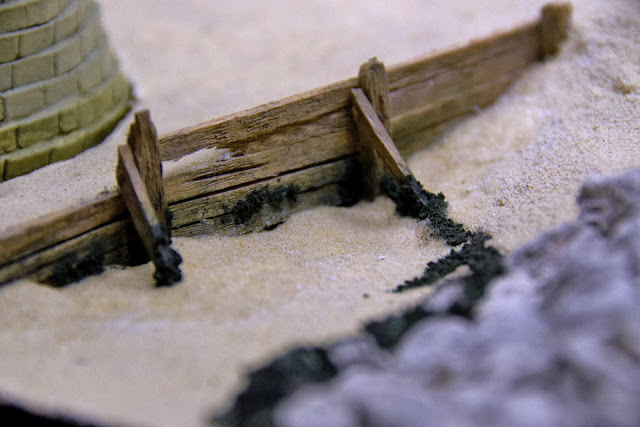 Those of you coming to ExpoNG tomorrow; I look forward to seeing you there. Please do introduce yourselves!