Designing a Diesel (& Why I've Never Built a Locomotive!)

Regular followers of my modelmaking will know that I'm not one for collecting rolling stock; especially not locomotives. Buying good quality locomotives costs a lot of money (thus I only have two!), and the thought of making my own makes me shiver with dread!

The story of my desire for a new diesel loco began as early as 2008 as I needed a loco for the second version of my first proper layout; Calshot. With some trepidation, I decided to purchase a Knightwing kit (You know; the industrial diesel shunter that seemingly everyone kit-bashed at the time). I also had a donor chassis in the form of an N gauge M7. Long story short, the kit was hacked about, never finished, and the chassis was not a good runner, so it remains abandoned to this day. Around the same time, a friend of mine kindly made not one, but two locomotives for me; a Tin Turtle on a tiny Japanese chassis, and a Decauville locomotive that ran on an N gauge Castle chassis that I also had to hand from my brief fling with N gauge. The Tin Turtle still runs well (albeit at the speed of light), but sadly, the steam loco never got fitted with couplings (see a common theme?!) and also didn't run from day one (as far as I remember, anyway). Presumably as it no longer had a tender to help with pick-ups, but I've never really given it a second look!

By now you're probably getting the picture that I avoid anything to do with locomotive building/fiddling!

The story doesn't stop there though. Back in May 2015, as per usual, we held our annual model railway and steam show in our village. I took along Old AGWI Rd, which was in very early stages (just a baseboard and track, with paper mock-ups; so actually the same as today!). The show went well, until my prized Lilliput HOe diesel shunter suddenly stopped working; never to work again. Surprise, surprise, it still sits to this day; abandoned in the same box as the steam loco.

Fast forward to December of last year, and I found my Kato chassis that I had stashed away, and found myself dreaming of a diesel loco. I doubt it will even run as nicely as the Lilliput one did, but something is better than nothing! Anyway, I guessed dimensions, and after a pleasant evening of 3D modelling I came up with a Mk1 version: 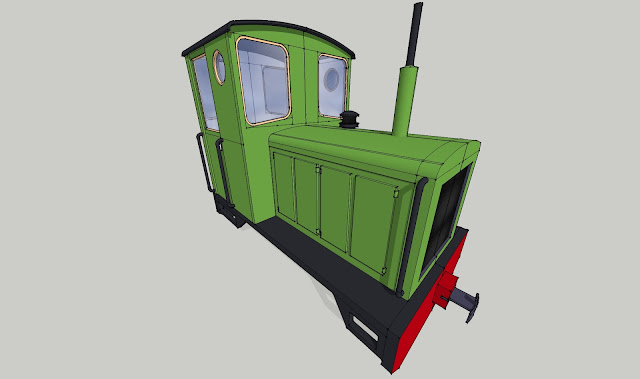 Inspiration was garnered from multiple places, although I suspect mostly from the broken bits of the Knightwing kit that I still had lying around. That gave me some basic dimensions to work from at least, although obviously it would need to be narrower compared to the standard kit. I suppose it's almost a little Ruston-esque, too. 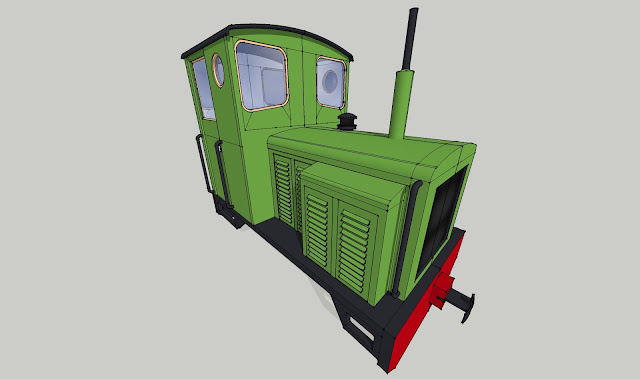 The MkII version soon followed, with multiple changes apparent. The most obvious one is the extra "wings" on the front, which I had seen on a locomotive somewhere and really liked the look of it. Alas I cannot remember what it was on or where I found it as that was 5 months ago now! In any case, other changes are the reduction of height of the main windows to keep it in better proportion, and the replacement of the engine doors with louvred panels. 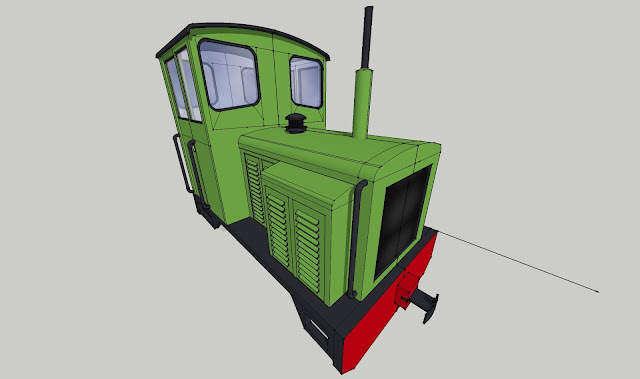 The MkIII version was due to be the final design, but as with all "final designs"... it wasn't final! Changes from the MkII version are that the window surrounds are now painted in a dark grey to match the running plate, and the cabside porthole windows replaced with more utilitarian square windows. And as for why it was not to be the final version, take a look at the image above again; see the black line on the right hand side? That's how long the Kato chassis is; I can only assume that I never thought to measure it before for some reason! 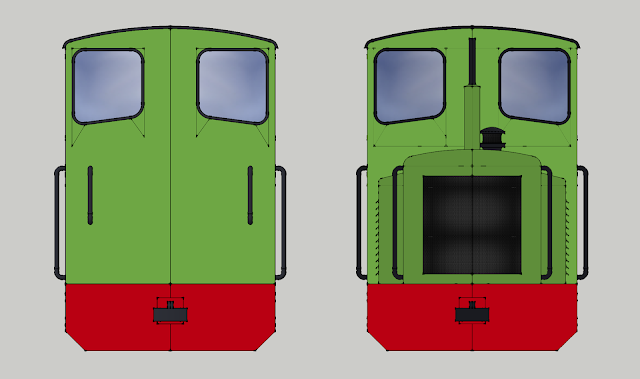 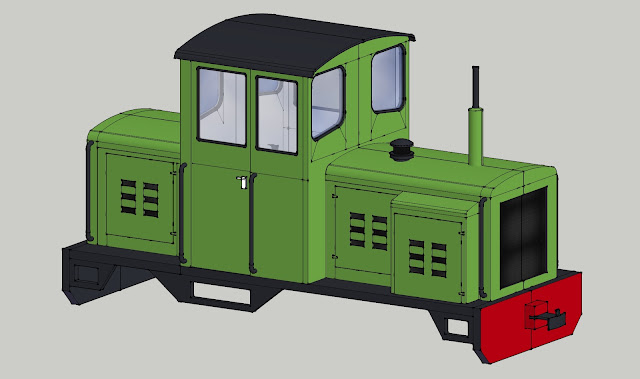 Which brings us onto the MkIV version, designed today. Note how upon realising I had seriously misjudged the length of the chassis, I opted for an off-centre cab design to accomodate an extra rear bonnet. This actually isn't far from the original diesel that I had tried to kitbash from the Knightwing kit! 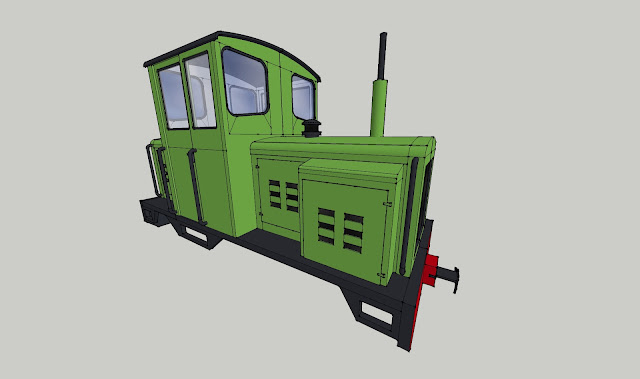 Aside from being that bit longer, the engine bay doors have also been redesigned. I went through about four versions before settling on these really simple ones. I initially used the same louvres as on MkIII; but even if I could physically produce such louvres, the thought of making 12 panels really put me off! Having searched the internet, I found a nice and simple design based on a diesel that once worked Java's Sugar Mills (see the penultimate photo on that page); simply 6 holes on the covers. Assuming I can find some fine enough, I'll be adding mesh behind them as I would for the radiator covers. 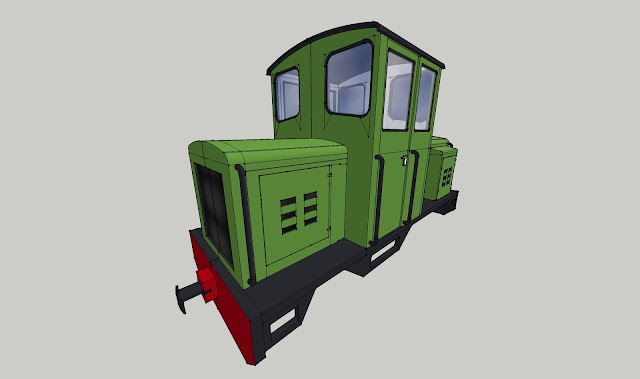 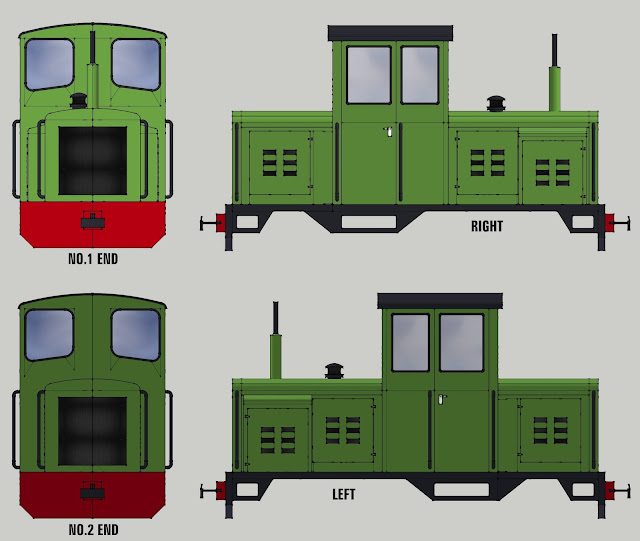 The question now is; Will it ever get built?!
I can't possibly answer that, but I have at least got the running plate cut and fitted...

...but before I go, here's a final image of the four versions: 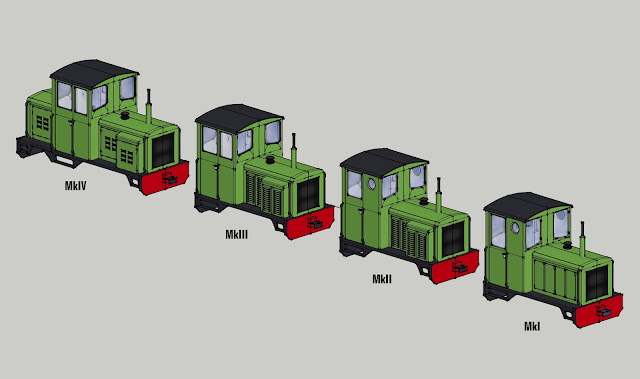 Strictly speaking, there have been more than these 4 variations shown, but it gives a good overview of the design process I think. I'd love to know your thoughts on the design, and what you would change, add, or otherwise improve upon. I'm very much new to this!
Posted by Jamie Warne at 13:09