End of the Line (for two layouts!)


I mentioned recently how I've been having a big clear-out. Well... ...things have somewhat escalated!
Remember how I said that Calshot would require a lot of work to bring back from its dusty state (remember that it's been without a cover in a dusty garage for 10 years!), and that Old AGWI Rd. also needed a fair amount of work...?

...well...they've both been completely dismantled. Yup. Crazy, I know. But I feel a lot better now that I know I can start from scratch using lessons learnt from building Sandy Shores. I knew deep down that Calshot would likely need to be scrapped, but I even I'm surprised by Old AGWI Rd meeting the same fate!


Like I said, refurbishing Calshot would've been extremely unlikely, but it's always sad to see a once much-loved layout get broken up; especially your first "proper" exhibition layout. Still, 10 years in a garage doesn't do much good for a layout, and there's no point hanging onto something I haven't touched in as many years. 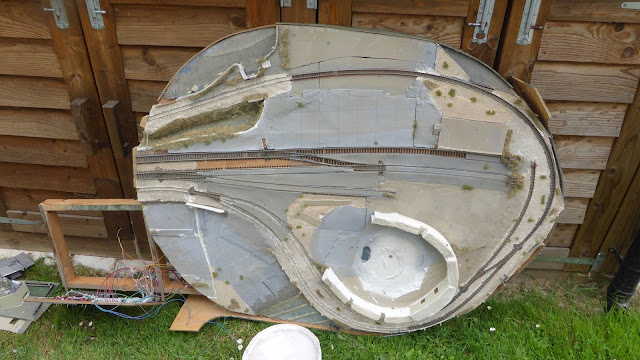 Above: Even after a de-dusting, the 10 years that Calshot was suspended from the garage ceiling had clearly taken its toll. The track was in remarkably good condition, but the woodwork had started to warp; especially the rear lattice frame. The backscene was long gone (it suffered mould damage at some point), and even assuming the electrics all worked, it would require a new fiddle yard, fascias, new infill between the tracks, and a major scenic revamp! 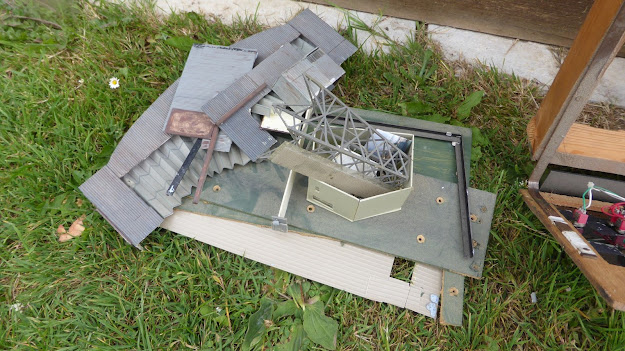 Above: Some of the buildings from Calshot will need a lot of work if they are to be reused on the next layout!

I fully intended to continue work on Old AGWI Rd now that the commissions have been finished, but the more I looked at the state of it after 5 years of storage untouched, the more problems I saw that would need fixing. Some relatively minor (cracking clay everywhere, and some wonky walls and lifted track), but as I looked underneath, I encountered more serious issues; particularly that the entire ply trackbed is only supported by polystyrene! What was I thinking?! 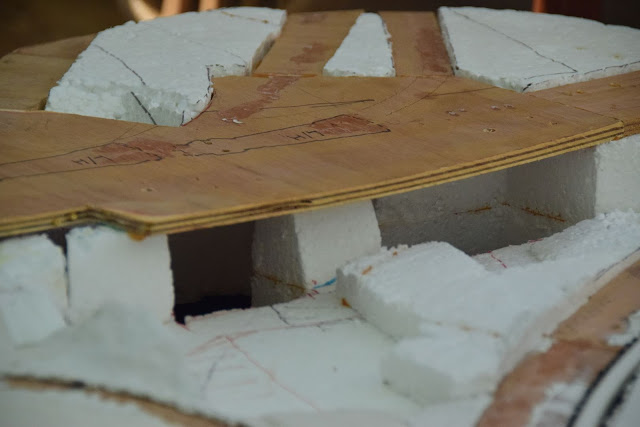 Above: The OO gauge section was woefully unsupported, and had bowed considerably even though nothing had even been on it! 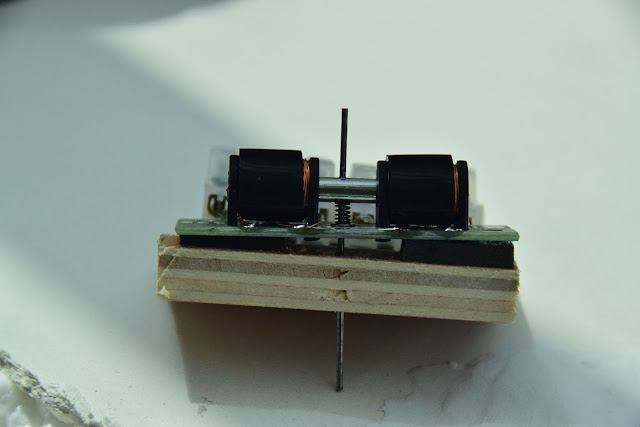 Above: At the time, my dad and I thought we were being clever by making custom mounts for the point motors. However, the sticky foam pads gave too much leeway, and as you can see, this caused things to go out of alignment after a while! 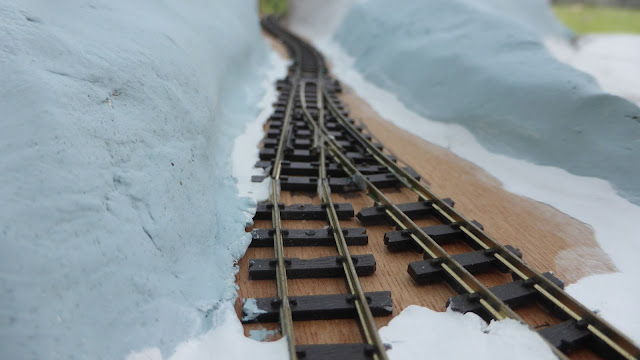 Above: This dodgy kink in the track was one of many problems I found; you have to be so careful laying track, especially where you have to use insulated fishplates. Lesson learnt! 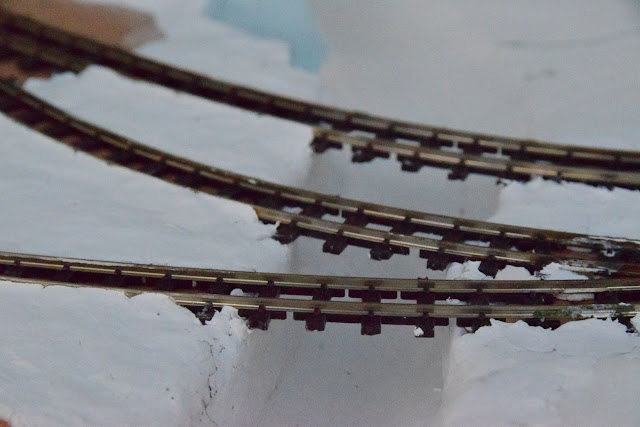 Above: These tracks (plus another one elsewhere) spanned a drainage channel. Unfortunately, because of the rush to have the track laid and working for its first show, I never got around to making the bridges or brickwork underneath. Retro-fitting these would not be impossible, but it would be very difficult!
All these problems were compounded by my inability to set up the whole layout at once without clearing an entire room of its furniture! This effectively sealed its fate, but there were a myriad of other reasons; such as not knowing what to do for a backscene, having a tiny fiddle yard, and remembering how difficult it is to set up on my own. Simply put, the more I thought about it, the less it made sense to keep it; so I'm glad I've made the bold decision to dismantle all 4 boards! 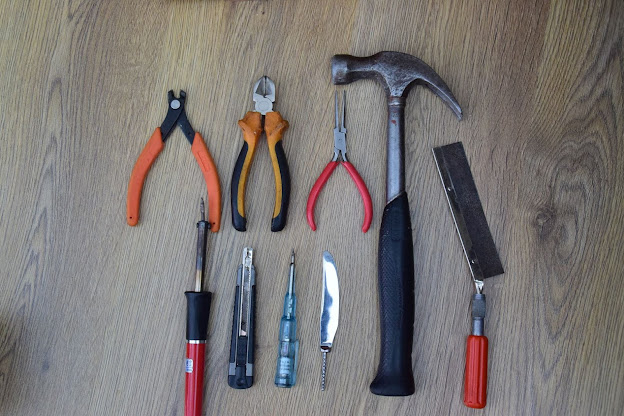 Above: The tools required for dismantling the layouts; the most used tool was actually the butter knife, although the hammer came a close second. Above: Having unscrewed and levered the PSE battens off of the polystyrene, more tedium awaited me as I used an old track saw to remove all the polystyrene. PU adhesive is pretty strong; had I used PVA it would probably have been a lot easier to salvage the polystyrene! 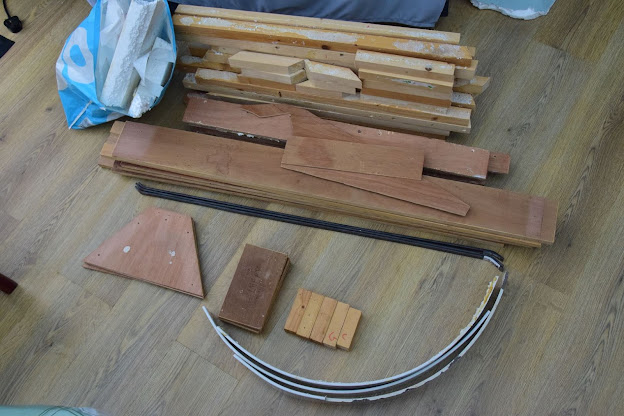 Above: All but the ply trackbed and a few damaged bits of fascia were kept; having been carefully removed.
It has taken me three days to dismantle both layouts due to how careful I've tried to be; I've even sorted and kept every single screw! I've also tried to reduce waste as much as possible. Only nails, broken screws, and a few bits of damaged ply will be thrown away.  Sadly, most of the polystyrene ended up in two bin bags as it did not come off easily (it ended up breaking into tiny chunks). Other than that, only a couple of tiny bits of straight track were unrecoverable, and I even managed to get a short length of inlaid track off in decent condition, which I was pretty surprised at! 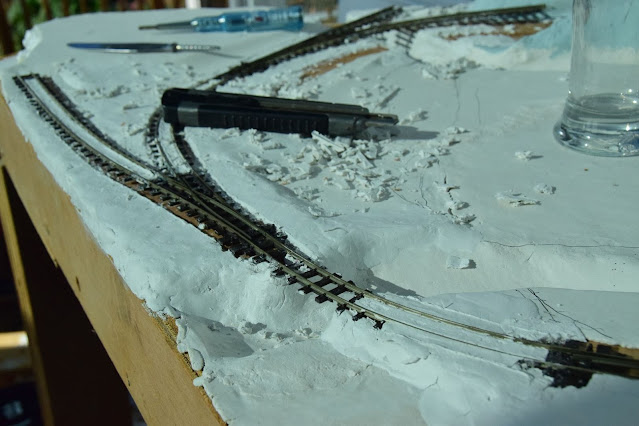 Above: Removal of the partially infilled track was a test of patience, but my solution was to score just past the ends of the sleepers, and lift the clay up with the knife. Seemed to work pretty well, although you had to be careful not to bend sleepers. I also had to be wary of hidden track pins.
Most of the wiring (from Calshot, specifically; as only a few droppers were installed onto Old AGWI Rd.) was bundled up so that I can reuse it, including keeping the wires for the point motors in separate coils to save time when it comes to re-wiring them later.
Here's one salvaged pile of bits (if you'll excuse the tablecloth!): 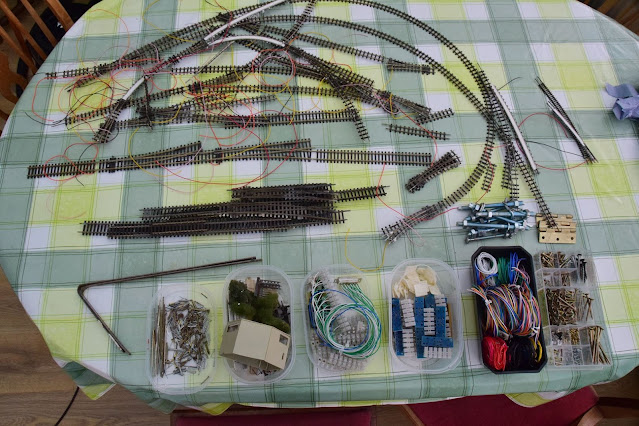 Above: This is my total haul with regards to track, wiring, point motors, screws, bolts, hinges, and other electrical components. There are also a few small scenic items in one of the tubs, although I've also kept the castle and its gate house from Calshot for now; though I don't think I'll have much room for it on the new layout! 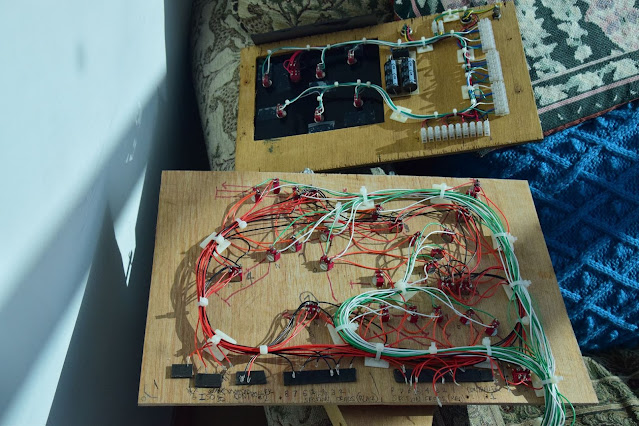 Above: The controls panels from Calshot (top), and Old AGWI Rd. Note how much neater John's wiring is on Calshot! I have much to improve upon for the next one. The only difficulty now will be desoldering all the switches and such. After a bit of research, I see that there are desoldering pumps and such that you can get, so that'll likely be a worthwhile investment for me.

Well, I've already had some interest in building a third version of Calshot, believe it or not! Similarly, I think the oil refinery will be something completely unique, so I'd love to feature a little bit of Fawley if there's room for it. Luckily, the two places are relatively close in real life, so with a fair amount of selective compression, my current vague plan is to build a smaller layout, or perhaps small modules, featuring a little bit of both layouts. How that will work, or what it will look like I've no idea... yet... but I do have ideas starting to form! I must however remember to design for the space I have available, not the space I wish I had! A small layout is the only thing I should build in my current circumstances, so I'll have to be strict on myself...