A huge thanks to those who have given me ideas; including users from Twitter, RMweb, and Blogger. I've been quite surprised by the positive feedback, and the suggestions made have all been taken on board and implemented into the next version. A special mention to those on RMweb for their photos of ship breaking and repair yards. Pete's selection of photos in particular have been incredibly helpful getting a taste for what such a site looked like, and how it functioned.

To that end, the ship breakers (now specifically a barge breaker/repair yard) has had a revamp, and has been enlarged by 100mm with two new prototypical buildings. I knew that I wanted to include such structures, but I could not for the life of me find anything suitable; suddenly I have two to model! 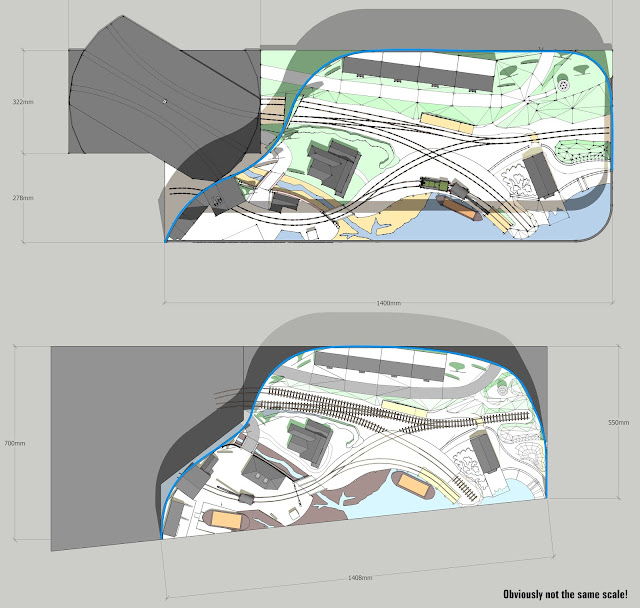 Above: First things first, I haven't bothered making the track less wonky or changing the hands of points etc. It's too time consuming to remedy that at this stage, and not really worth doing until I've physically tested the track plan out. The only change is to ease the curve to the ship breaker's building.

Note how I've actually narrowed the right hand end of the layout by 50mm, and squared it off. The decision to narrow it was to reduce the amount of sea modelled, but I might change my mind when it comes to the mock up if I find things are a little tight. The backscene has also been angled a little bit more to make it less obtrusive. The left hand end has been widened by 100mm to allow more room for the breaker's yard. Let's go through a few more changes... 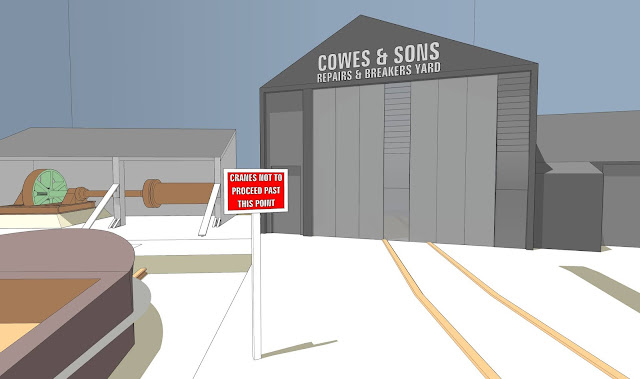 Above: As pointed out by a few people, the angle that the track originally went into the breaker's boathouse/workshop was too sharp, resulting in it looking very weird as it was obvious that in real life the track would end up going through the side of the building a few metres in. The curvature of the track itself was reduced, and the building placed at less of a severe angle now that it didn't need to align to the slipway. Note the new (red) sign! 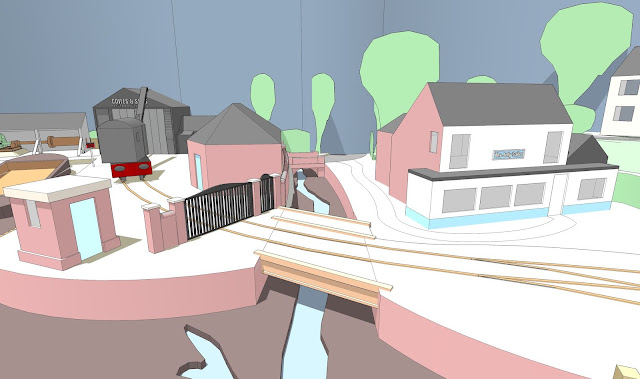 Above: To give a little more room for an extra building in the yard, the curvature of the stream was also reduced. We'll get onto the new brick building that required the change later, but note how I've added another girder and a small gate for pedestrian access to the yard. Looking at it now, perhaps these should both be the other (near) side of the railway, next to the old military gate house! Note the new path taking pub patrons to the road at the rear. 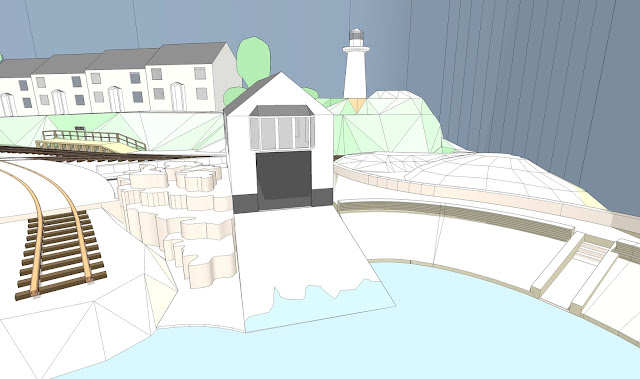 Above: On first glance, it might not appear that much has changed here, but there have been modifications. The rock armour is more prominent; going right down to the shoreline, and the right hand sea defence now curves around to go in front of the backscene. This allows more room for the sand dunes directly behind the coastal path (the defences clearly installed in more recent years, hence the presence of sand dunes behind them). The hill that the lighthouse sits on is also a little higher, and the whole lot a little closer to the board edge than before. 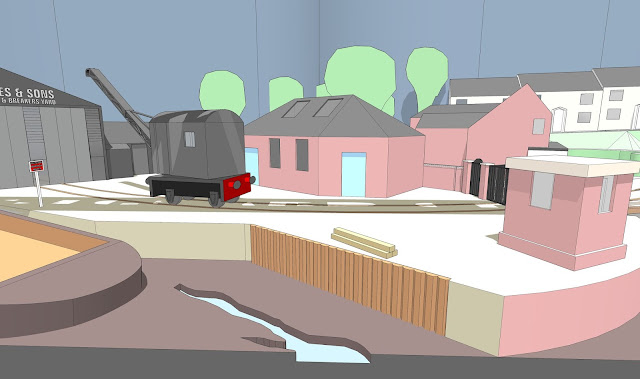 Above: With 100mm added onto the front of the breaker's yard, we have more space for buildings and the slipway. It also gives us more room to show more of the wharf; seen here with a mix of brick, concrete, and steel sheet piling. The small stack of sleepers will be surrounded by clutter and weeds on the model. 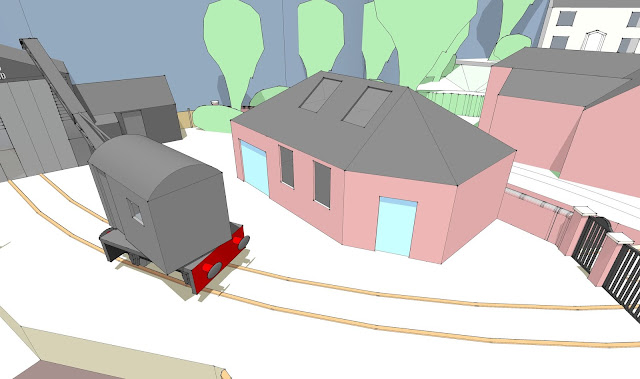 Above: The new brick building is much larger than the small corrugated iron hut it replaces (the hut can be seen tacked onto the boathouse on the left). This is a copy of that found in Pete's photos (see here), but with two major changes. The most obvious being that I've angled part of the front wall to allow sufficient clearance for the railway. The second change being that I've flipped the building so that the garage is not on the new angled wall. The blue doors will likely be pretty wonky and weather beaten! 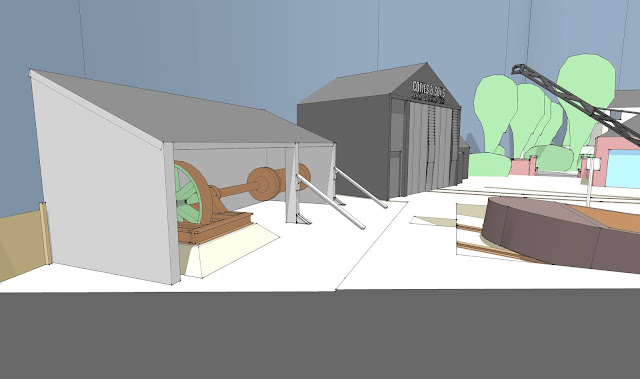 Above: The other major additions are on the far left of the yard; all once again copied from Pete's photos. We have a small barge being scrapped, and this relatively large rope house for winching the boats onto the slipway. I haven't modelled it, but I also plan to add the cradle as found in Pete's photos. Note the additional ironwork reinforcing the shed, and the large concrete plinth with support beams holding up the winch. I'm hoping to be able to turn this winch on the lathe, although time will tell if I manage it! Either way, all dimensions will be roughly calculated, and as always I'm aiming more for a general feel than a precise re-enactment. Note the new fence behind the shed to hide the backscenes close proximity. 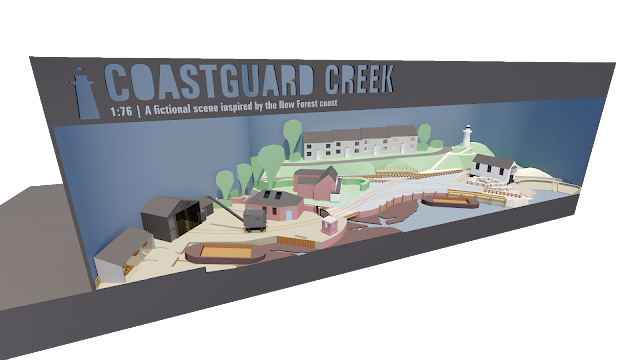 Above: A rendered image showing a general overview. As none of the model has proper textures added (only colours), it won't look particularly good being rendered; hence the decision just to screenshot the raw 3D model except for this one image. Hopefully it gives a glimpse of what is to come though.

And that's about as far as I should take this 3D model; at least until the physical mock-up has been made, tested, and works as it should. One final thing to note is that I haven't bothered modelling the fiddle yard, simply because I'm not decided on what approach to take as of yet. I'm not particularly worried about that right now, but it might be something that the mock-up will help me make a decision on!

As always, thoughts, photos, and suggestions all welcome.