Last studio update, I showed the ammended design for the new sign feature that will sit above the composing/PC desk. The construction actually began a few days ago, but yesterday was when most of the work was done; in fact we spent practically all day on it! 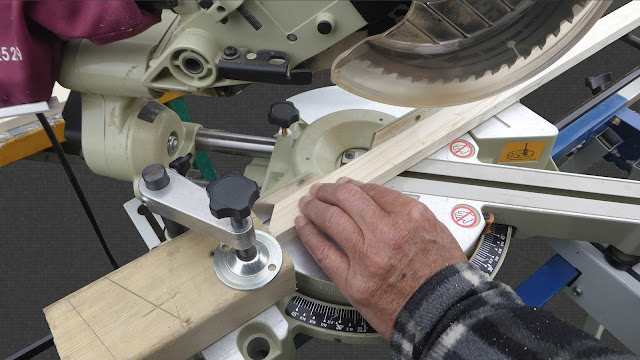 Above: The first step was to cut out the 37 blocks. To do so, we chose the fastest method possible; using a compound mitre saw, with a block of wood clamped on the bed to act as a stopper. With each block taking a mere 5 seconds to chop, we were done in little over 3 minutes! 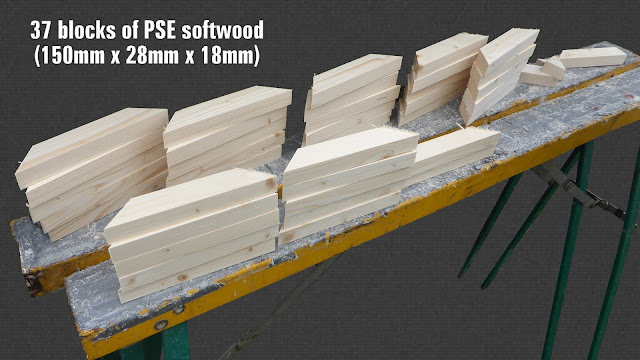 Above: And just like that we have our blocks ready to be sanded. 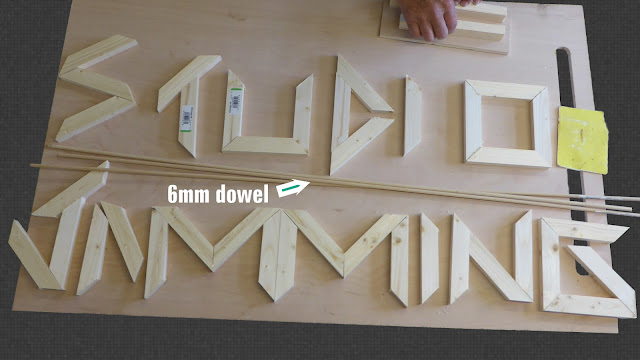 Above: Now it was time to remember how I arranged the blocks to form the sign. Almost got it right; the A, S & N were wrong in the photo above though. Anyway, now came the difficult bit, drilling all the holes in the correct places for the 6mm dowel separators... 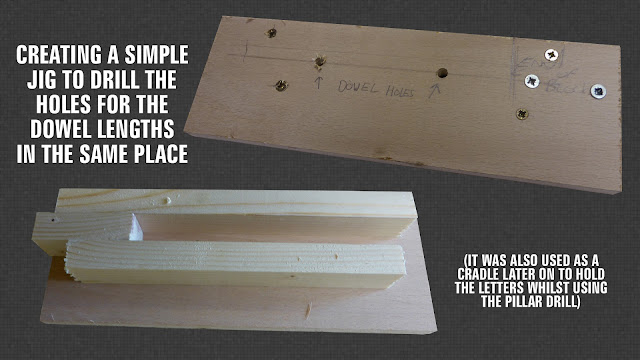 Above: To make our lives a little easier, we, OK, my Dad devised a simple jig. As you can see, this allowed us to accurately and quickly line up the holes for the majority of the blocks. 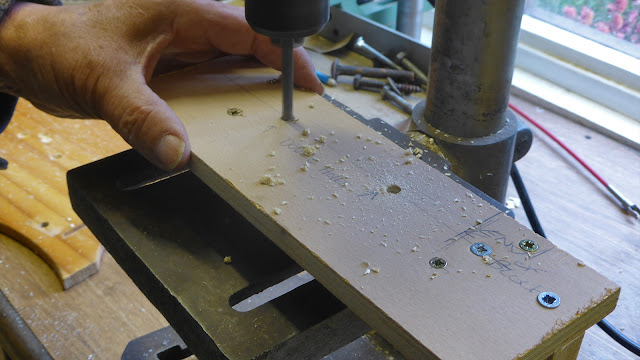 Above: Initially, my Dad wanted to drill without a pillar drill, but I persuaded him it was both quicker and easier; plus accuracy was very important to keep the letters and dowel aligned properly. The combination of the jig and the pillar drill made light work of most of the blocks, but not all were as straight-forward... we'll talk about that later! 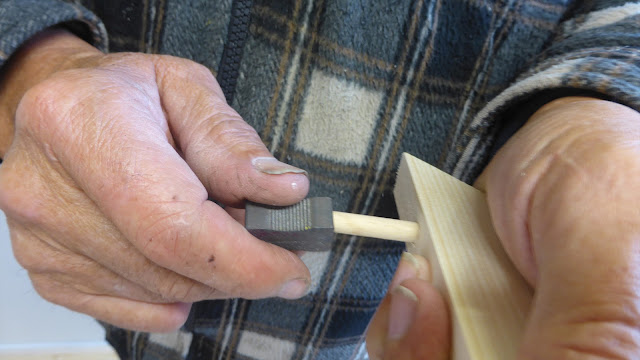 Above: Being a carpenter since his apprentice days, my Dad has a few tricks up his sleeve. To help guide the dowels into the holes, he sharpens the ends with a pencil sharpener. Ironically, he rarely uses the pencil sharpener to actually sharpen pencils; he usually uses a Stanley knife! 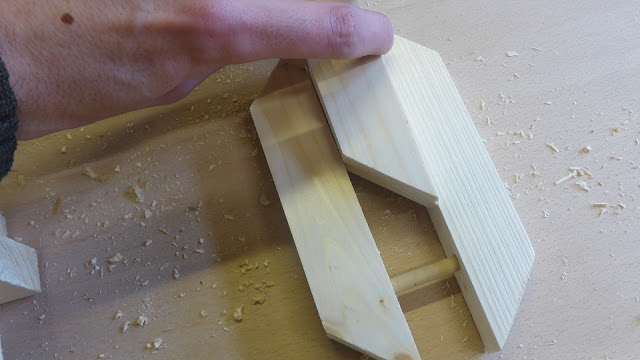 Above: I designed the sign in such a way that it meant we could use one of the PSE blocks to space the letters. Saves time and materials that way! 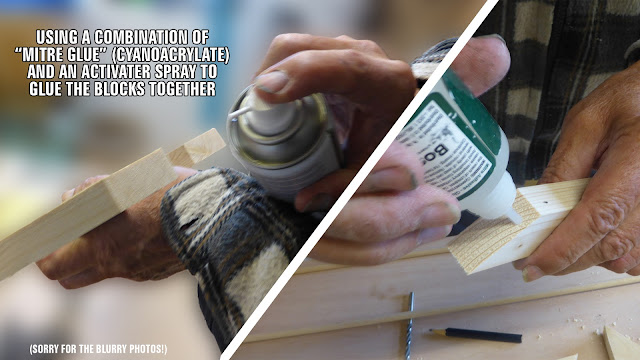 Above: As the photo says, Dad opted for cyanoacrylate and activator spray to glue the blocks together. As you'd expect, this stuff holds fast in 10 seconds or so; perfect for this kind of work. (Just don't accidentally glue the blocks onto your work surface, or worse!) 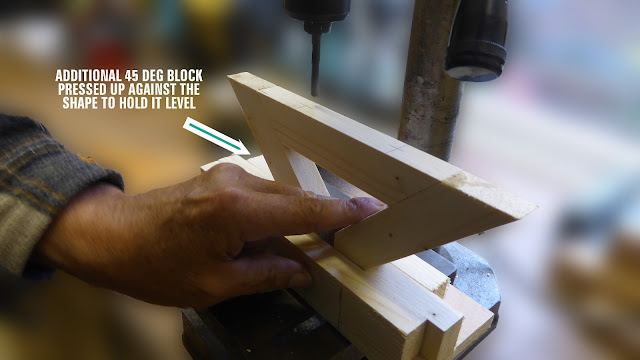 Above: Ah, yes. The difficult bit. Thanks to my awkward design, some of the holes were particularly tricky to drill. Here's one such example. The cradle, and an extra 45 deg block were needed to wedge the "D" in place, and ensure it was level. 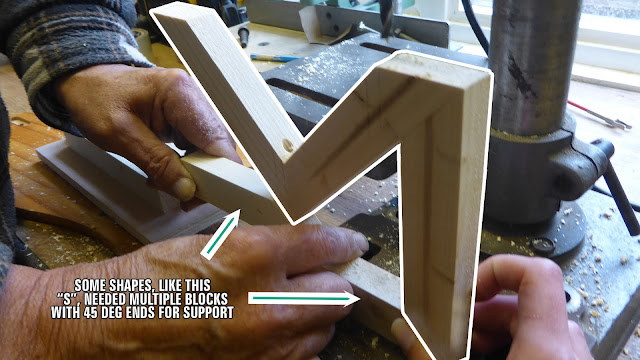 Above: But there were worse examples. Here's the right side of the "S". That said, a bit of lateral thinking and two of the 45 deg blocks borrowed from other letters were all it took. That, and two pairs of hands. This is a posed photo by the way; in reality I held everything together whilst my Dad drilled the hole - thus it wasn't quite as awkward as the photo makes it look! 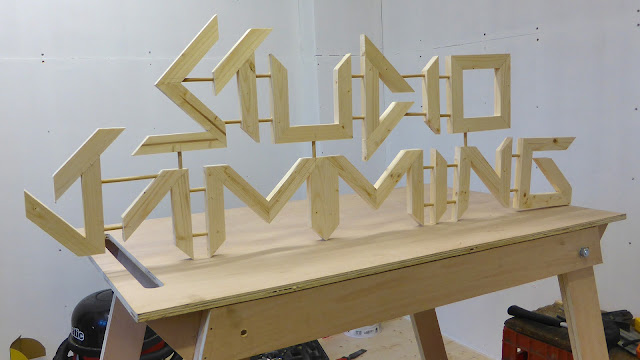 Above: And there we have it; what probably amounted to 4 hours work in total. I think even Dad was surprised at the final result; it really does look better than either of us imagined! Oh, the wooden dowels aren't glued in by the way; they are a nice snug fit. I might paint them white to blend in with the wall better, but for now I'm happy with them as they are.
I don't often like to blow my own trumpet, but I must say; I'm rather proud of the result! Even though it may look like a simple design, it's more complicated than you expect, and a lot of thought went into it. My favourite feature is probably the "D" in "Studio" that fits into the second "M" of "Jamming". Oh, and the "A" kicking the "J" up in the air! 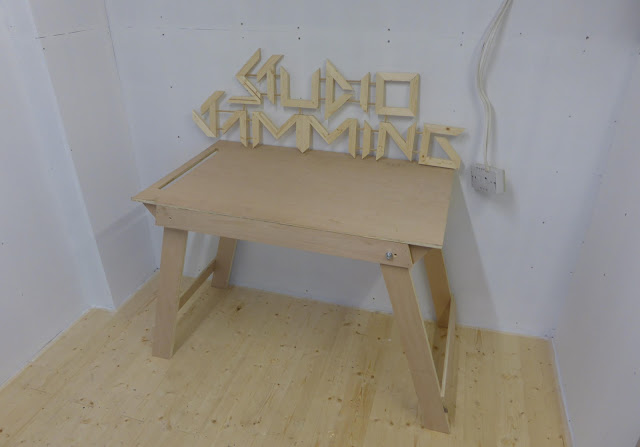 Above: Here it is posed on my new folding table. You'll have to excuse the dangling plug socket! The sign will eventually be fixed to the wall above, albeit spaced with more (larger diameter) lengths of dowel.

And there we have it, another fun little project well on its way to completion; "all" I need to do now is to start the laborious task of fitting the LED strip behind... this could be fun!