Two weeks ago, I decided to take a break from work-related projects, and dedicate some time to Coastguard Creek. 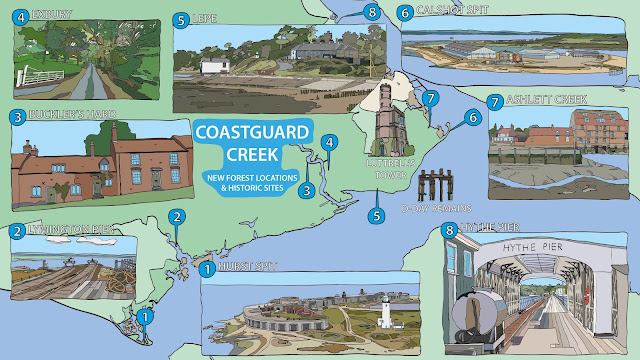 Rather than work on a mock-up (as the studio is still in disarray), what actually ended up happening was I spent a few days producing this information panel showing off inspirational locations across the New Forest coast! In all honesty, I'm not quite sure why I've drawn this, but if nothing else it's both a nice reminder of what I want to get out of the project, as well as being something that would look nice hung up on a wall or next to the layout at a show.

Hurst Spit is a shingle spit jutting out 1 mile into the Solent. Its strategic location gave it significant importance throughout history as a military outpost. The castle appeared in 1541-44 by Henry VIII to protect against a French and Spanish invasion. It initially comprised of the tall cylindrical tower in the centre, with it's separate gatehouse and two smaller flanking towers. In the 1860s it was expanded to form the sprawling structure we see today; with both a new west and east wing.
There have been lighthouses built on this spit in 1786, 1812, but the current "high" lighthouse was built between 1865-67. There are still two other lighthouses "low lights" in existence; both perched on the castle wall. The round stone tower was built in the 1860s, but was superceded by the iron lighthouse in 1911.
There is actually a railway connection; the two large wings of the castle housed huge guns, and a narrow gauge (man-powered) railway was built from the dock into the castle in the 1880s to aid with the delivery of stores and ammunition. This can still be seen today. 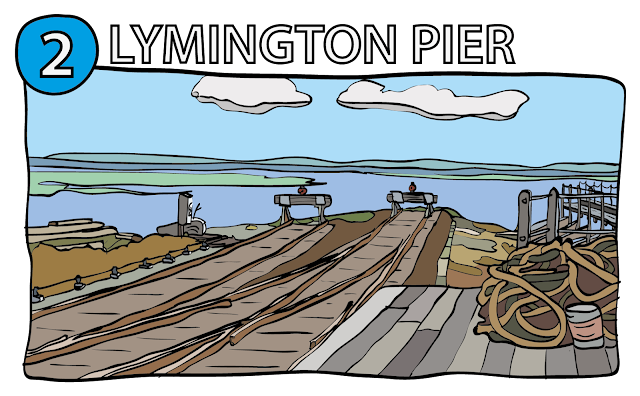 Speaking of railway connections, the Lymington Branch is of course a famous (and thankfully, still existant) line; terminating at Lymington Pier. This has provided a handy link with ferries to the I.o.W. since 1884. Sadly the station is now nothing more than a few bus shelters, but in the past it featured a run-around loop, various platform canopies, and a signal box. The loop was removed in 1967 after rationalisation. By the early 1980s, the 1884-built ornate platform canopy, together with the later 1938 SR additions, were all but gone.
As such, the sketch above shows the end of the line before rationalisation; with a ground frame for the points visible to the left. Note the coils of rope on the end of the wooden platform. Whilst the original platform canopy was rather lovely, it's the SR built extensions that really captured my interest; you may remember my initial ideas for Coastguard Creek featured it; although obviously the idea of a proper platform got shelved when I realised freight would be the mainstay of the (fictional) line. 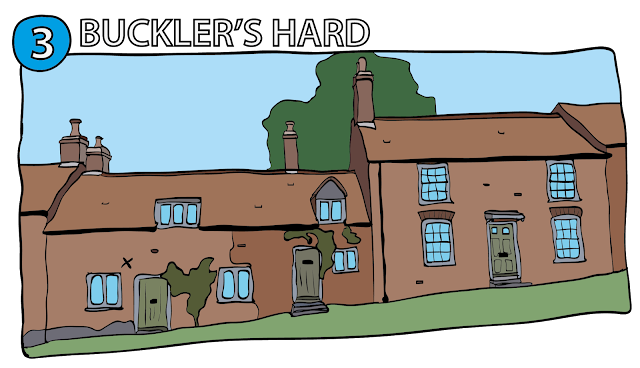 It may not look like it from the sketch above, but the rather picturesque Buckler's Hard is a historic shipbuilding port on the Beaulieu River. Whilst it's no longer used as such (being very much a tourist destination), the buildings have all been nicely preserved; you can almost imagine the frantic shipbuilding in the 1700-1800s when you walk around. The street pictured comprises of two adjacent rows of houses stepping down to the waters edge, but there is no road; only grass and a gravel path down the middle. It feels very "old-worldy"!
Buckler's Hard was a very important port and later a shipbuilding site for centuries, and indeed many Royal Navy ships were built here from the thousands of old oak trees that the New Forest could offer. Like many places in this list, it was used extensively during D-Day; the Beaulieu River lined with hundreds of ships. Nowadays, you can take a relaxing stroll down the hill and visit the shipbuilding museum. 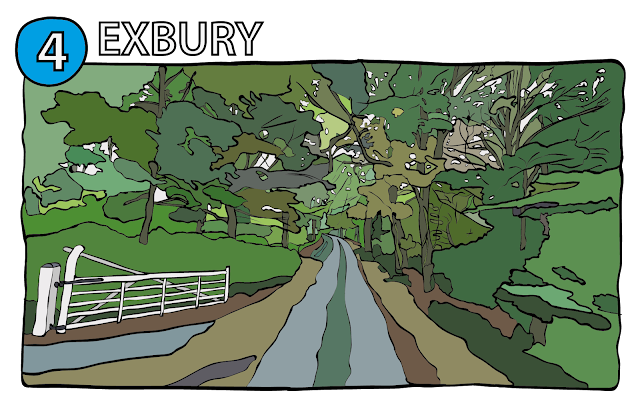 Following on from Buckler's Hard, Exbury is just along the Beaulieu River. Now famed for it's house, gardens and narrow gauge tourist railway (a fine railway, by the way!), the village itself used to be closer to shore, but was moved inland as a way of more easily serving as a residency for the workers of the Exbury Estate. The settlement can be dated as far back as prehistoric times!
I chose a lane going from the river to the estate itself as the sketch for this location; it is absolutely typical of many locations found all across the New Forest; white 5 bar gates, a canopy of trees, and a narrow road meandering through it.

As mentioned numerous times, Lepe is the single biggest inspiration for this project. Aside from the lack of any railway (although one was planned), it has everything I love about the New Forest coast; a beach, trees, being steeped in history, quaint buildings, an exposed location, a lighthouse, and a stream draining off the heathlands. It also has a reminder of the strategic importance of this section of coast; notably the remains of the D-Day preparations and bright yellow warning signs that denote pipelines that deliver oil under the Solent to the I.o.W. Remains of the huge and secret manufacturing facility at nearby Stone Point that constructed large concrete caissons can still be seen. These caissons were floated across the channel to form part of the temporary Mulberry harbours used for D-Day.
Interestingly, whilst details are a little lost in the ravages of time, I've just learnt that Lepe also once had a shipbuilding site, and even a port; you wouldn't believe it when you look at the place now! It is believed the original harbour silted up by 1825. The aforementioned stream is called "Dark Water" (due to the minerals washed down from the nearby heath), and originally entered the Solent further east. It is believed that the Great Storm of 1703 breached the original banks and may have even destroyed the mill that once sat there (a 1640 map shows it in place); taking with it the mill pond. The coastguard cottages and watch house (the white seaward structure above) were built in 1828 to combat smuggling along the western Solent.

Calshot should need no introduction for those of you that know me and my past layouts! Like Hurst Castle, Calshot Castle was ordered to be built by Henry VIII in 1539; indeed, the central circular tower is very much of a likeness. Things were more or less uninhabited on the spit until 1913 when the Royal Flying Corps established Calshot Naval Air Station as a seaplane testing base. 5 years later, it became RAF Calshot, and a surge of hangars, workshops, and other ancillary buildings popped up; almost completely covering the spit. Like previous locations, Calshot had a hand in the D-Day preparations, including sending over 5 seaplane tenders to Dunkirk; successfully evacuating hundreds of soldiers.
Of course, the narrow gauge railway at Calshot was just as important; and was built initially to aid construction of the base by bringing supplies from Eaglehurst. The accomodation blocks were built at the end of the line at Eaglehurst, and included a locomotive shed and stores building. The line was used to transport RAF personnel to the head of the spit right until the end of WWII, when the rolling stock was found to be unsafe, and the line abandoned and eventually lifted.
Three of the large hangars remain to this day, and are all used as part of Calshot Activities Centre. The castle is now an attraction (having also been used both by the RAF and the coastguard during its life). A coastguard tower (not shown in the sketch) was also built after the base closed, with an adjoining lifeguard boatshed. 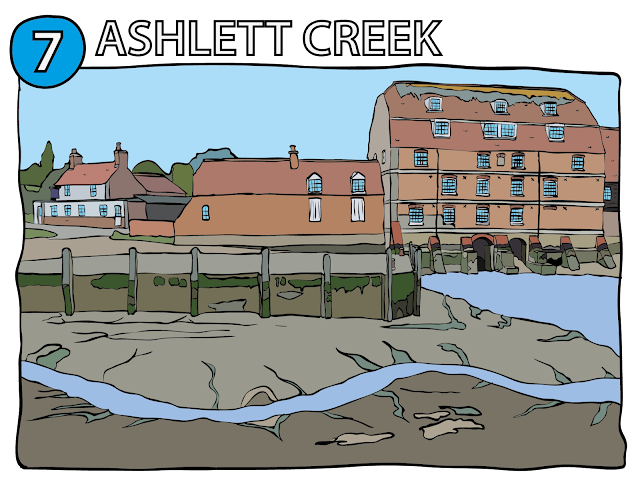 Those of you who saw my ill-fated layout based on the Fawley Oil Refinery will have also seen the above scene in its entirety (well, I hadn't built the mill, but the shell of the pub was built, along with the quayside and muddy estuary). Either way, the tidal mill is a prominent feature of this little settlement, and was built in 1816; replacing an earlier mill. It now plays host to the local sailing club, and is shown in the sketch above with its original landward extension (now reduced in size/rebuilt). The landing stage was primarily used to help with offloading of materials from barges for use during the construction of the Fawley Refinery (behind the trees in the background). The refinery's narrow gauge railway even ran to this landing stage, splitting into a pair of sidings. A small 5 ton travelling steam crane was used to load up the flat wagons.
Whilst the mill would no doubt make for a nice feature, it is just too large to fit on Coastguard Creek, and so I will instead model only the pub "The Jolly Sailor" to its left. It's a typical style of New Forest architecture, so will fit in perfectly with the other planned buildings. 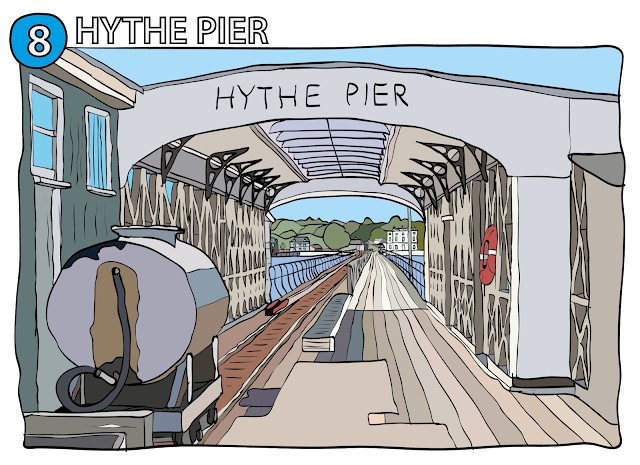 Whilst there are other very interesting locations along the 40 mile New Forest Coastline, I'm going to end with the quintessentially British pier railway over in Hythe, on Southampton Water. Dating back to 1909 and replaced with an electrified railway on the opposite side of the pier in 1922, it is officially the oldest continuously operating public pier railway in the world, whilst the pier itself is itself the 7th longest in the British Isles!
It is powered by 250V DC using a third rail on the seaward side; there is no run-around loop, so the engine is on the landward end of the train, with a driving trailer on the seaward end. There are always two locomotives to guarantee a service, with the second loco stored on an unpowered track that leads to the workshop (the only point on the entire line). Interestingly, there is also a four wheeled tank wagon (shown above) which once a week provides fuel for the associated Hythe ferry.
Perhaps the thing I love most about the line is the pier station (at least when it's been freshly painted unlike a lot of the times I've seen it!). The ornate woodwork and metal brackets really give it a unique style; especially when complete with the overall roof.

All in all, this drawing exercise has also helped me focus on the general atmosphere that I wish to portray. Equally, it has also opened my eyes to interesting local features; like the D-day remains at Stone Point (Lepe). It would certainly be nice to have a nod to that if I can find the room without overcrowding the layout. The New Forest coast has held a pivotal role in the country's history, not least in WWII; Marchwood Military Port, RAF Calshot, Lepe and many other sites were an integral part of events like D-day. I think it's important to remember and celebrate that; so I'll be looking to incorporate something to that effect, even if it's just producing a nice panel for display during exhibitions.

I have started to draw a similar version of this information panel for non-New Forest inspirational locations, but so far there are only two sketches. If I find the time to complete it, I will of course do a similar blog entry.

Until then, stay safe, and happy modelling!

N.B.
Sadly, since this drawing was made, you may be aware that part of Hurst Castle (the section on the left side if you look at the sketch of it) collapsed into the sea. I rarely talk politics or apportion blame, but this really upset me because it's clear that there was a complete lack of common sense by the organisation that was meant to look after it. Warnings were given, yet no action taken. Hopefully the rest of these historic sites will not find themselves in a similar situation...