If there's one thing that has been long overdue (and in fact is something that none of my layouts have had the privilege of having!), it's a safe way to store and transport Sandy Shores. You may remember back in April when I showed how I transported the layout in my tiny car; with only a rolled up carpet and blanket to stop things moving about. I'm really surprised that I haven't managed to break anything off of the layout, as there are a number of rather delicate structures attached to it!

This isn't the first time I've made plans for making a storage container for the layout. Over 4 years ago, I had planned a simple box into which the layout and it's associated stuff would be stored in. In many ways, not much has changed, but there is now a large trolley that will need to be fitted into the same box, so a redesign was called for. 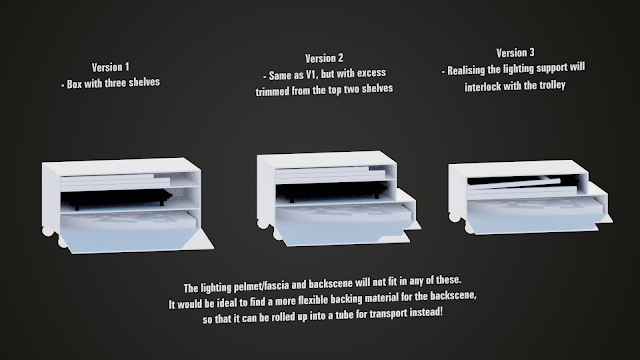 The box has gone through multiple versions, as the image above shows. It was only after version 2 that it became readily apparent that in its current form, it would never fit in my little car. Thankfully, I realised that the lighting rig and trolley will interlock for transport, allowing for a smaller box. The comparison between version 1 (on the left) and version 3 can also be seen in the photo below:

As you can see; it's still a very tight fit! The problem with making boxes like this, is that it increases the overall size of the layout considerably, and makes it... well... more boxy! It was already difficult fitting it in the car to begin with, but at least this way it'll be more secure and easier to take into any venues. Perhaps the main downside of making this box will be the weight of getting it into the car; but if necessary, I could make a pair of folding ramps from leftover wood. 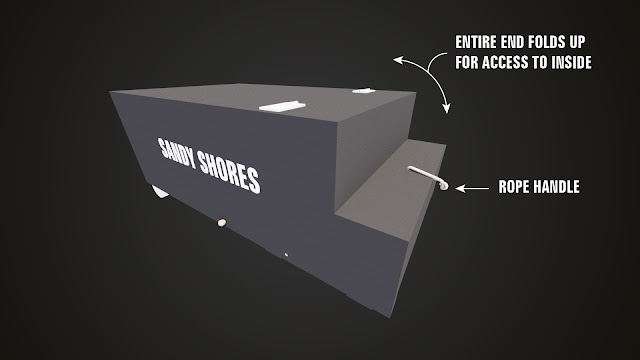 It was only today that I realised the first three versions shown earlier all suffer from a major design flaw; the access to the shelving inside was through one of the long sides. Of course, this would mean the long end would be unsupported, and given that the weight of the upper section sits on the unsupported shelf, it would be extremely liable to bend to a considerable degree; perhaps as much as 10mm or more! The solution was to allow access only from one end.

Given that I wanted to minimise adding any more height to the box, having two seperate hinged ends was a no-go, as they would need supporting blocks on top. I therefore decided that the best course of action would be to add hinges to the top, and allow the entire stepped end section to lift up. The key here was to rebate each piece of the end section in a way that provides maximum strength without the need for additional bracing. 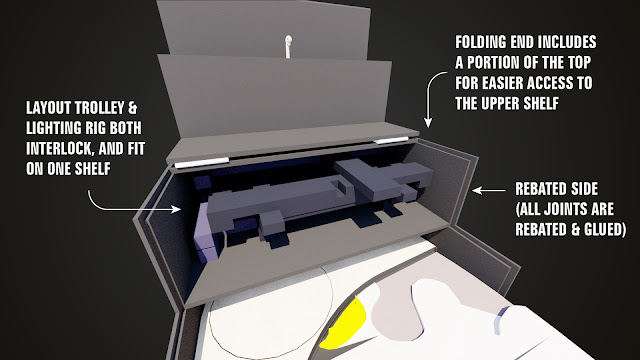 You may be wondering how I will easily slide the layout in. I haven't modelled them, but the answer lies in some tiny fixed castors that will be fitted onto the underside of the layout. I found these in a well-known DIY store, and are I think less than 30mm tall, including its bracket (I'll show them in tomorrow's post). The awkward space on the bottom shelf produced by the odd shape of the layout will probably have a box wedged into place; likely holding the various structures from the layout. 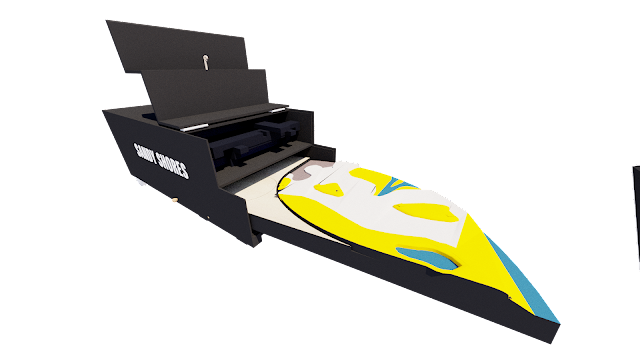 In the render below, I've shown the general process involved in taking the layout to an exhibition with its new box. As you can see, the box has an integrated extending handle (you'll see this in more detail later), and thanks to its heavy duty 100mm fixed rubber castors, it can be wheeled into the exhibition venue with relative ease. Always exhibiting alone, anything I can design to make it easier for myself to exhibit is worth doing! Anyway, once the layout is set up (shown without its backscene, curtain, and fascia), it can be stood on its end, and used either as shelving during the exhibition, or perhaps a display pedestal: 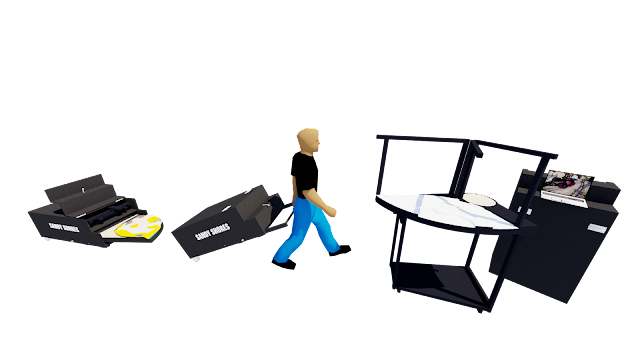 A view of the underside shows how the handle is integrated. It actually slides between two 18mm x 44mm PSE softwood battens, and is held in place by two thin cross struts on the bottom. To lock the handle in either position, a wooden peg (i.e. dowel with a knob on the end) is inserted into matching holes in the PSE. Simple! 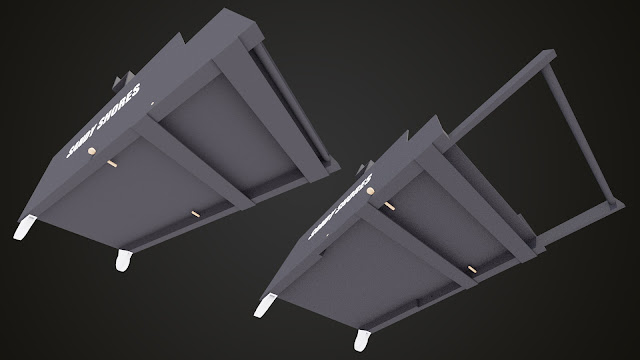 I've already started marking out the two side pieces, so with any luck I'll be able to start construction tomorrow; assuming the weather doesn't make a turn for the worse!

Edit - Colour-coded for clarity (side panel missing to show interior): 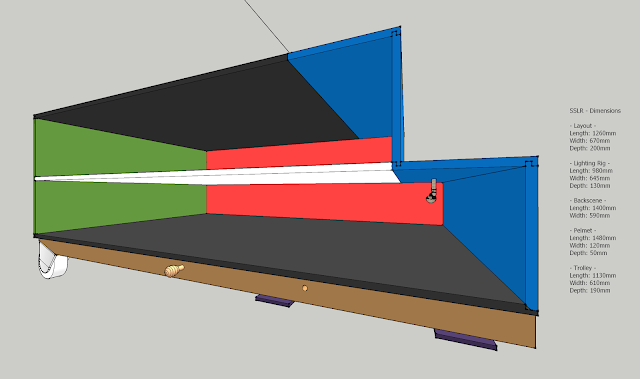 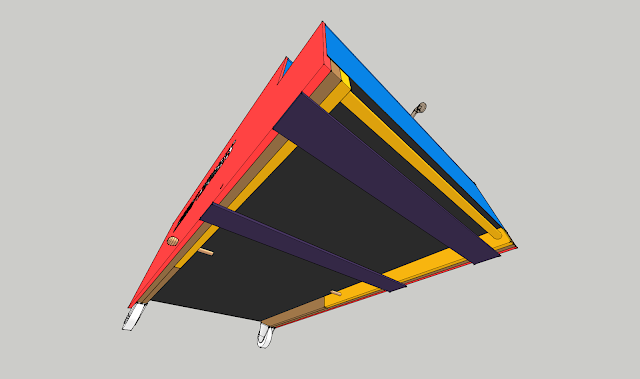 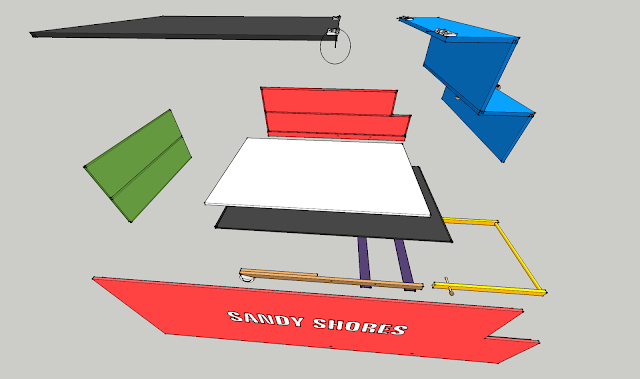 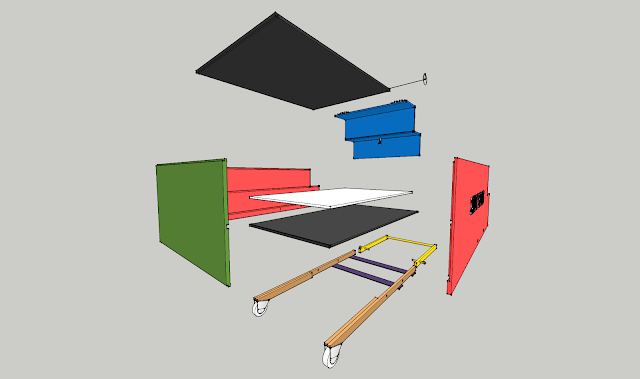