Sandy Shores - Toning Down The Sand


As I've been looking at the layout under various lights, it's occured to me that the sand is too bright and too yellow. Yes, I know it's real sand I've used, but something that is quite often forgotten is that every colour must be toned down on a model, otherwise it just looks wrong. 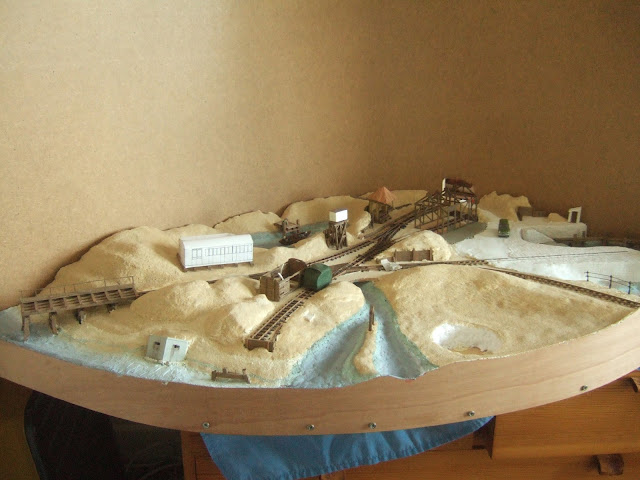 With that in mind, and also the fact that the sand is still patchy; with the paint underneath showing through, despite having a couple layers of sand on the layout, I decided to paint over the whole thing. So I began to trial various pots of emulsion - all in varying shades of yellow and white. Eventually it turns out that the best solution was a very watery coating of Wickes own brand of masonry paint "Soft Sand": 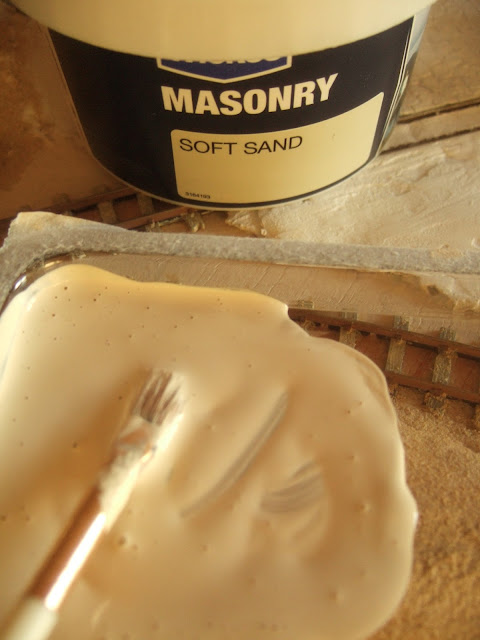 With apologies for the weird lighting and lazy camera usage, here's the difference...
The patchy bit of play sand can be seen in the centre, with the painted sand all around it. 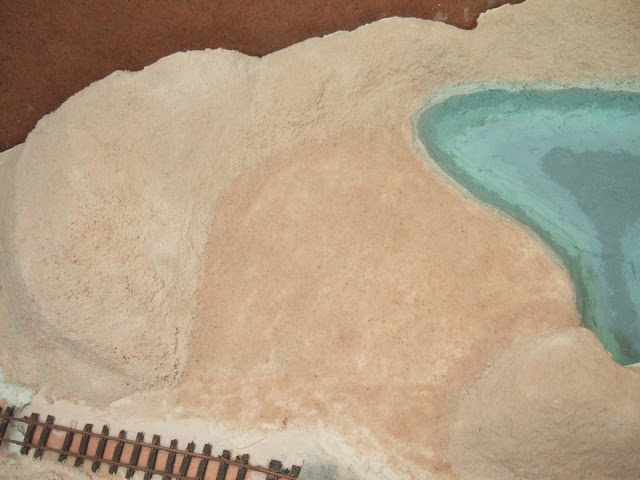 And now here's something a little special - with the 3 LED spotlights (originally intended for Old AGWI Rd.) we have a nice warm (but not too yellow) colour for the sand dunes. Much more in keeping! And yes, I finally found the backscene from Calshot... although the bad news is that not only is it crinkled, it's also gone mouldy - thanks to a damp wall by the shelving it was on (how it got there, I've no idea).

Nethertheless, I plan (on a nice day) to visit the seaside and take a few new panoramas so that I can get them professionally printed. Even in this state, I think you'll all agree it has lifted the appearance of the layout humongously! 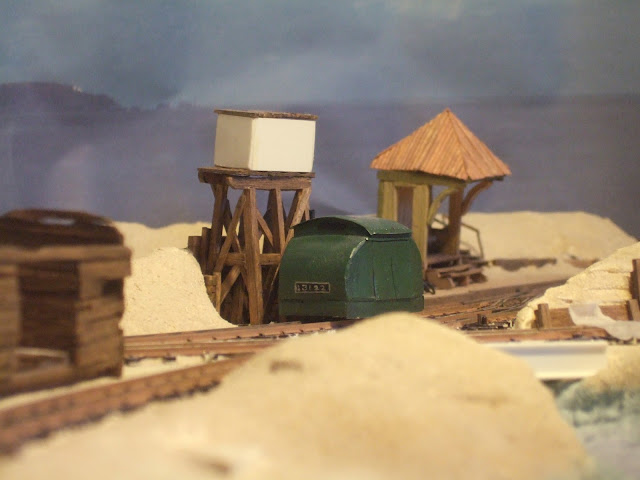 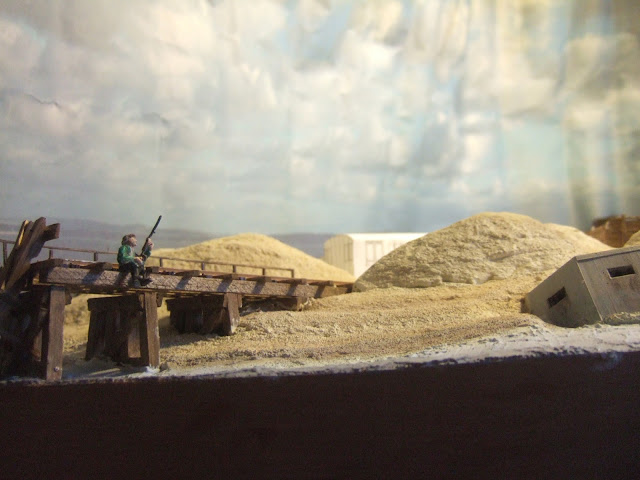 Sandy Shores - It's back!

2017 was a year that sadly did not allow for modelmaking, so Sandy Shores has sat completely untouched. I did move the layout up into my bedroom back in June with a view to working on it, but a day later I was suddenly asked to make an animated advert. After that came music composing, followed by other hobbies - all taking up my free time. But yesterday I saw the opportunity to begin working on the SSLR... 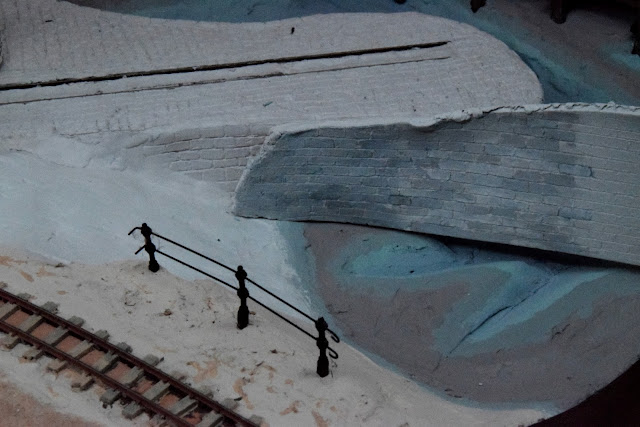 First on the agenda was to start to get some colour onto the layout - the muddy tidal area, pond, and most of the visible sea was still white. After much experimentation and research using photos and Google Earth, I convinced myself to take the plunge and start mixing emulsion paint together. The result is a vast improvement on the overall appearance of the layout. The painting of the muddy tidal area started with the dark blue of the deeper water, giving way to green and a murky brown as it reaches the level of the mud. I'm trying to depict it as if it's just after half-tide, so there's still a bit of water around, with the higher mud area just visible. Eventually I'll experiment with either PVA for water, or some commercial product. Oh, and you'll also note that for the first time ever, I've begun experimenting with painting the stone walls. So far it's a little too blue and grey, so there's still much more to alter before beginning work on the real thing. 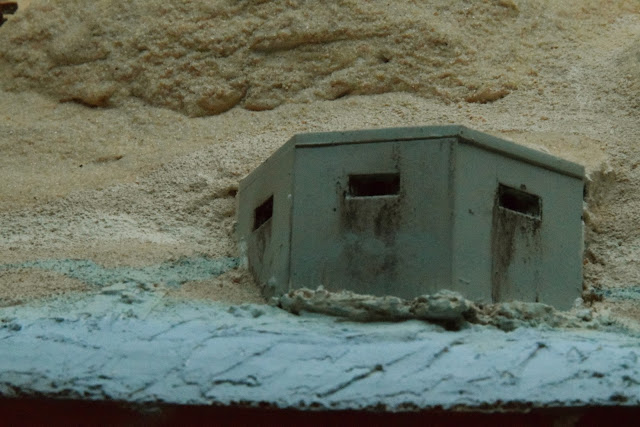 As mentioned, I also had to finish the visible area of sea, as only the area to the left of the headshunt jetty was painted. It took a little bit of experimentation to get the colours to match, but I got there in the end. Darker blues in the deepest parts give way to light blue, then almost white at the tide line. This then merges into the cream of the sand. Those looking carefully will notice I've started to model the high tide mark on the sand - the faint green line follows the contour of the beach, and will eventually have dark green/dark brown seaweed modelled. I'll probably use a combination of ground cover to do this. 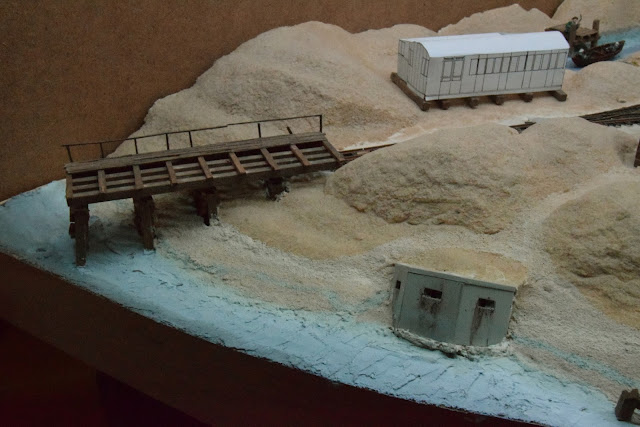 As you'll note, I still haven't replaced the headshunt trestle properly - I still need to fix the broken handrail, but I've included it in the photo to help give a feel for how the paint has lifted the appearance here.

Anyway, I'm still trying to get the right colour balance with the lighting rig, and every photo of the pond area I took seemed too blue, so I'll wait until I can take photos in daylight before I take any photos of it. 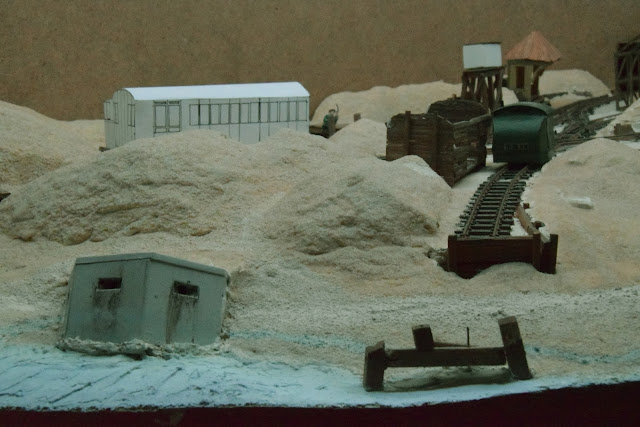 Anyway, that about sums up the progress the last couple of days, tomorrow (between errands) I'll try and get some more sleepers painted to get rid of the glossy black appearance.
Posted by Jam at 09:42 No comments: