So it's already been a week since the last update - how time flies! In truth, I've been asked to compose some music for a friends' video game so I've had little time for modelmaking the past few days.

I wanted to take a break today so I decided to get on with more miniature woodwork. The photo below is deceiving - I'm not actually on about the grounded van body (although I did draw that this morning and was going to start building it until I realised I had no plastruct sections small enough). Incidentally, I've decided the van body will be in a derelict state, not as drawn below. 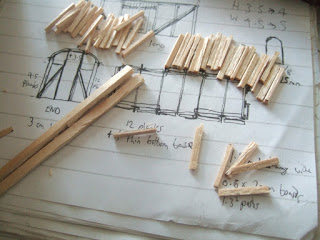 Anyway, I digress. I'm actually cutting up the component parts for a wooden footbridge that links the lighthouse to the spit. As with the inspirational prototype at Spurn Point, I wanted such a bridge since the lighthouse was actually on the beach rather than on high ground, and thus would need dry access when high tide comes.

85 tiny bits of cut up lollipop stick later, plus the 4 longer lengths, and we have a rudimentary footbridge (minus the handrail of course). Note also I've left gaps where the handrail supports are. I'm not sure whether to have handrails both side or not, hence why I've left these out for now until a decision is made. 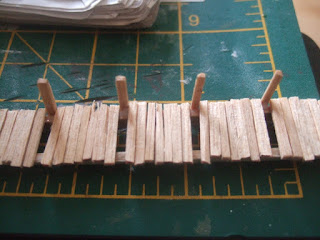 I'm not 100% sure which way the footbridge should go - either the way it is below, or facing 90 degrees clockwise. (I.e. towards the "concrete" railway jetty). I think I prefer it as below though because it allows for some more interesting viewpoints. 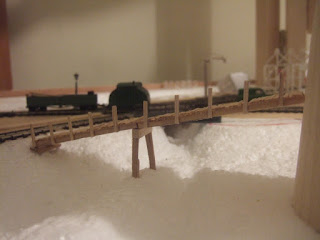 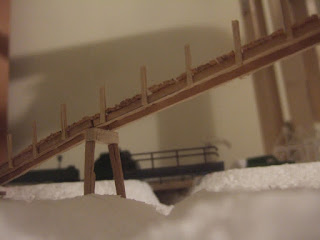 Let me know your thoughts!


Work has continued on the headshunt jetty! The first image shows the difference when the webbing between the sleepers have been removed (left) compared to the webbed track (right). Quite a noticeable difference! 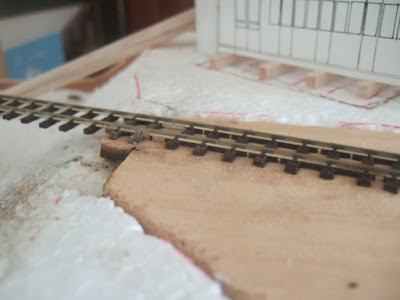 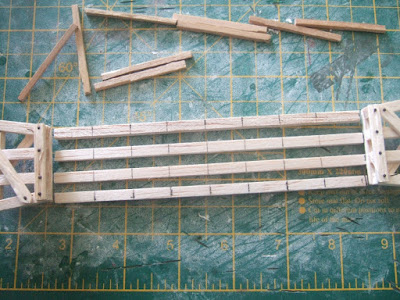 Once this was done it was time to mark out the locations of the fake sleepers that support the handrails of the jetty. These could then be glued in place with PVA and were left to harden for about an hour. 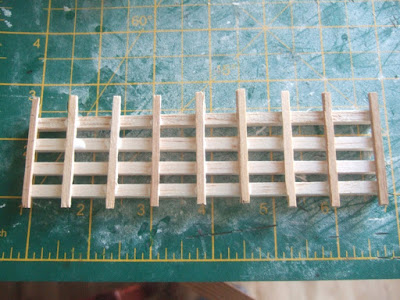 I wasn't sure about how to do the handrails but in the end I decided to cut out thin strips from lollipop sticks using the chopper. It was surprisingly difficult getting the posts the same length and thickness, so it may be worth re-making these tomorrow. 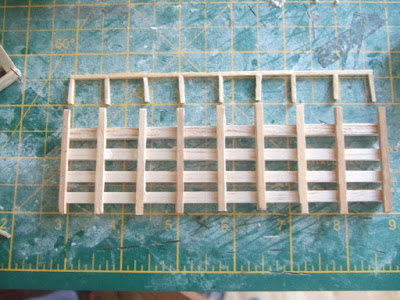 With the trestle loosely assembled, it was time to check out some various positions for photography! 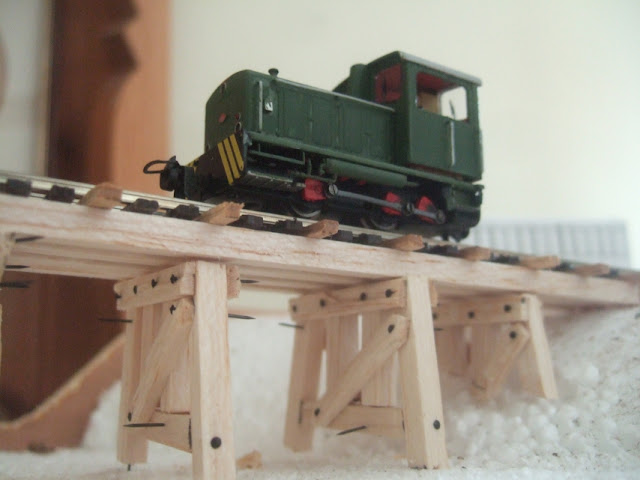 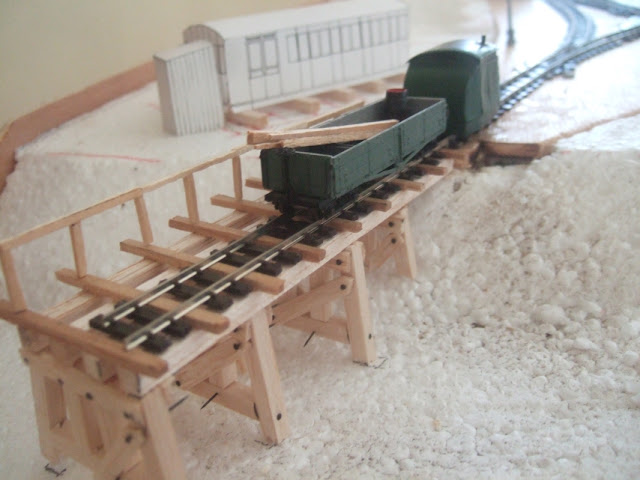 Above: The only working loco on the line, the Tin Turtle, gently creeps forward with some more wood supplies.

Below: Having suffered a catastrophic engine failure, the O&K diesel sits rather forlorn at the stub of the old steamer pier. Having once been an extremely good runner, it's sad to see it unusable! On a positive note, I really like this angle, and I think once the layout is complete it will be a popular photography spot. 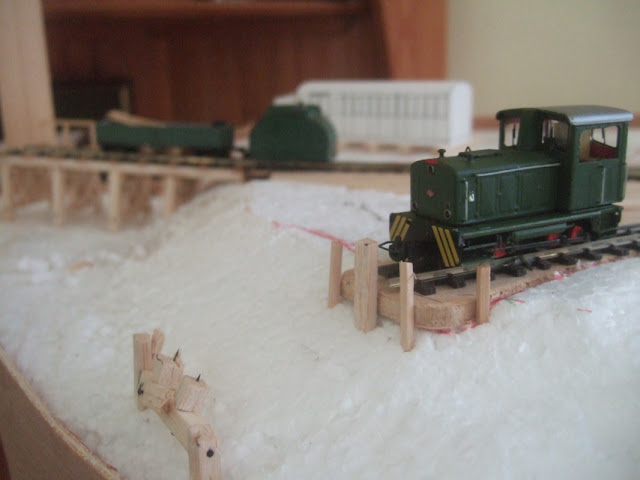 
As predicted yesterday, a thin blade was all that was needed to unfix the track from the trackbed. A cutting disc was used to cut the trackbed halfway, and a simple bending was all that was needed to snap it off. I then checked my diagram against the track and existing trestles that I had made and realised that they are too wide. The central and outer beam would be too far apart for the rails to sit directly over them as you can see below: 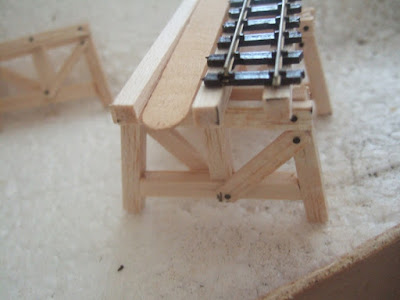 This meant a redesign was needed, so I designed a 4 pole approach instead of the current 3 pole structure: 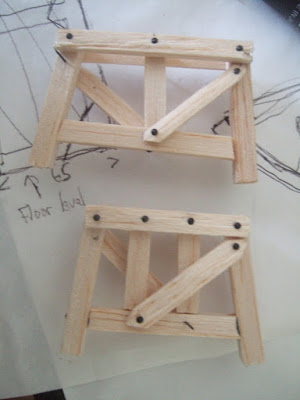 So the trestle is now 1cm narrower, but now has better support for the track: 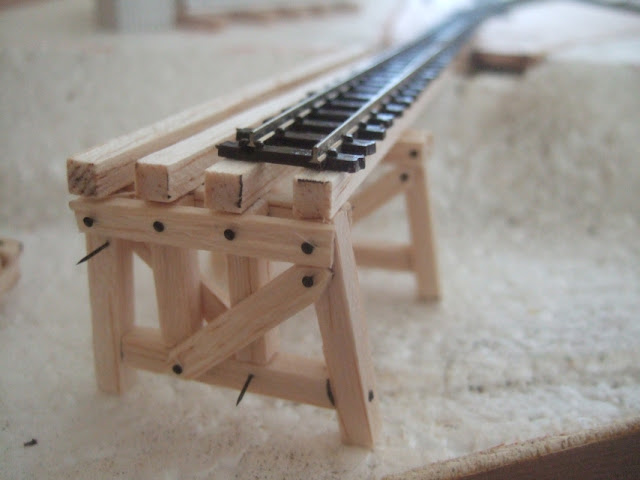 As I mentioned yesterday, I've started work on building the wooden jetty that forms the headshunt for the two sidings. I had a look online for some existing prototypes and found one in Scotland that seemed ideal for the scenario. Nothing too complex - basically just an A frame with a couple cross members really.

The prototype photos shows a very grey weathered finish that will need to also be applied to the model, as well as a lot of moss! I've no idea how to weather anything, and I hate painting things so no idea what to do there. Anyway I don't need to worry about it just yet as I'm still working out the construction of it.

There seems to be a lack of construction photos of such railway piers on the internet that I can find, although most seem to have their rails spiked onto long timbers, rather than sleepers. Anyway, I've made a start on the supports using some balsa wood and trackpins: 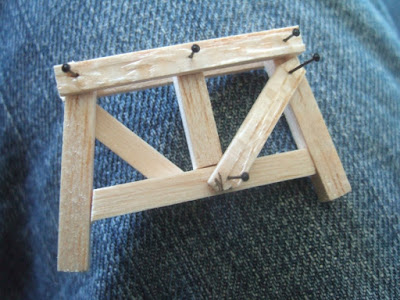 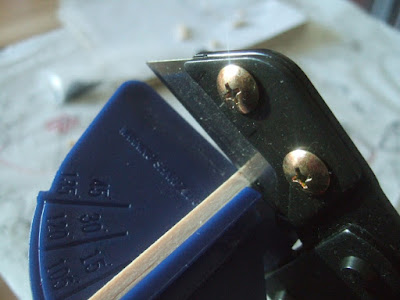 Above: This handy cutting device makes light work of chopping the lengths of balsa, although I wouldn't use it for precision cutting balsa because the cut is not always clean. A saw is a much better idea for that. 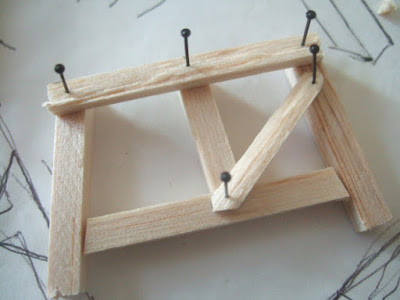 Below: The current state of the trestle/pier/jetty. I'm tempted to  remove the existing ply trackbed here and also cut the webbing between the plastic sleepers and make a bespoke deck. Like I said earlier, although most rails on piers seem to be directly spiked to longitudinal beams, I didn't want that in this particular location. Mostly because this would make construction more difficult. 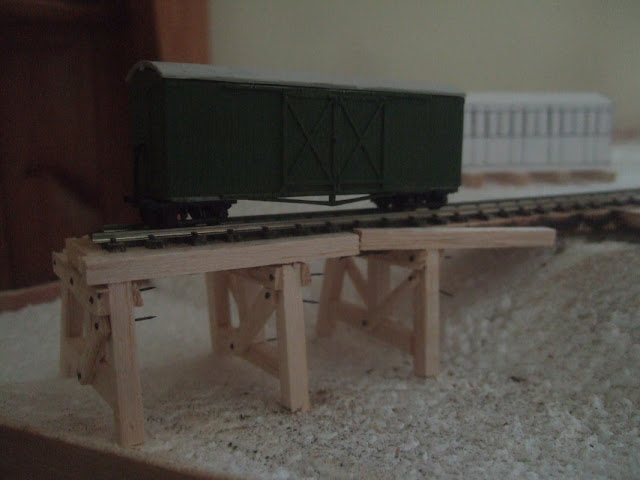 I think it would probably be better to remove the trackbed and the sleeper webbing, especially since views from a low angle would make these clearly visible, as in the photo above! What do you think?

Edit: I've decided to get ride of the trackbed and I've come up with the drawing below. Based on numerous photos of American trestle bridges, I think this should be a good option. 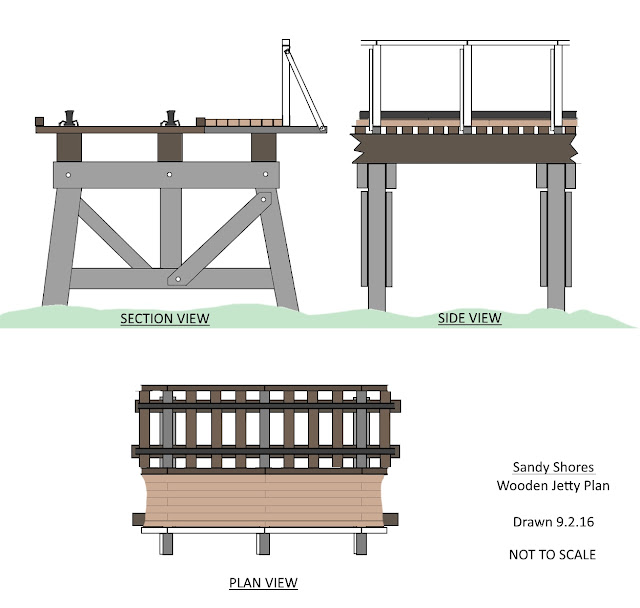 
I've taken the last month off from Sandy Shores both to take a break and because the conservatory that the layout was housed in was getting pretty cold!

Yesterday was a rare sunny day and I decided now that the house was a bit emptier (long story which I will not go into!) that I could move the layout into a warmer room. After that was done, I began to turn my attention to the structures on the layout - specifically the lighthouse. I tasked my dad with finding a large bit of wood to turn the basic shape of the structure. A few minutes later I came back to see this on the wood lathe: 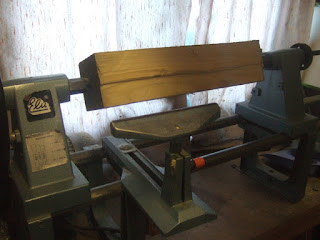 Suddenly in a flurry of wood shavings, my dad was quite happy whittling down this huge block of wood into something more cylindrical. In the photo below we see him using a parting chisel (I think that's the right term) to mark the length of the lighthouse. 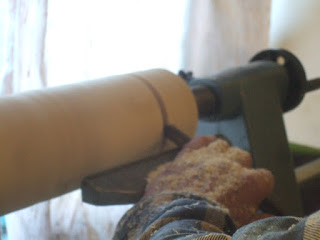 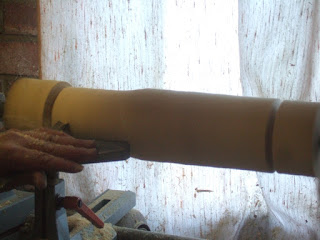 Above: With both ends parted most of the way, he continued working away on the piece with a C-shaped chisel (I forgot to ask the technical name for it).

Below: Once the final diameter was reached, he used this "scraper" chisel to smooth the wood on the lower section of the lighthouse. 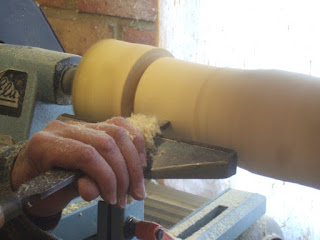 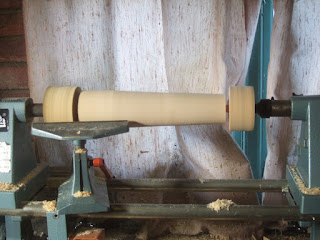 Above: And here we are with the finished profile! A knot in the wood did fly out at one point, but as the whole thing will be covered in clay and then scribed it was of no real consequence.

I might actually ask if the join from the straight section at the bottom of the tower to the beginning of the taper can be curved a little bit as per the prototype at Sturn Point, but apart from that I'm happy with it so far. Next job is to drill a hole down the middle (for wiring) and also cut out apertures for windows.

I've also begun work on the wooden jetty/pier at the end of the layout although I'll show this in better light tomorrow!